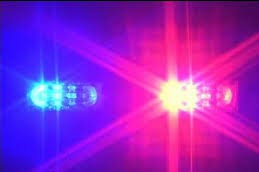 The officer was the sixth to be shot and wounded since June 1. He was shot in the arm and is expected to make a full recovery.

The 14-year-old is the one who pulled the trigger, firing shots into the officer’s unmarked security vehicle, police said. The teen and a 16-year-old boy were arrested in connection to the shooting near Convention Plaza and North 10th Street.

The boys were taken into custody near the 900 block of North 10th Street shortly after the shooting. They have been turned over to juvenile authorities.

The officer was sitting in an unmarked security vehicle when two people approached him, Larson said.

The officer was able to move his vehicle to safety, Larson said, explaining that the officer didn’t fire any shots and was hit in the arm.

The injured officer broadcast the description of the suspects. A call for an officer in need of aid went out about 11:55 p.m. Sunday.

Larson said police recovered a gun but he didn’t elaborate on what kind of weapon it was.

The officer is 47 years old and has 24 years of law enforcement experience. Authorities didn’t say what company had hired the officer to provide security.

The incident was the latest attack on police in St. Louis this year. Mayor Lyda Krewson pointed out on social media that the officer was the sixth to be shot since June 1.

Just a week ago, on July 26, a man driving by a gas station fired at officers and riddled a police car with bullet holes.

In addition to the six current officers shot and wounded since June 1, a retired officer was killed June 2.  Retired St. Louis police Capt. David Dorn was shot to death by looters while Dorn was protecting a pawn shop, authorities said. Several men have been charged in the case after store surveillance showed them looting the store.

Another recent incident involving an off-duty St. Louis police officer was on July 20.  The officer exchanged shots with a teenager who tried to carjack him. The officer was working a secondary job as security for Kutis funeral home in the city, in the 2900 block of Gravois Avenue.