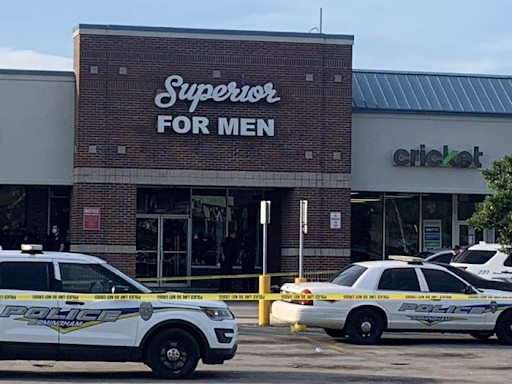 Authorities late Saturday night identified one of the slain men as Reginald Curtis Crawford Jr. He was 26.

The second fatality victim’s name is being withheld pending notification of family.

The shooting happened at 4:05 p.m. at Roebuck Plaza off Parkway East, which has been the scene of several shootings. When the shooting stopped, two males were dead inside the store Superior For Men.

Afterward, the two homicide victims were pronounced dead on the scene and two other victims were taken to UAB Hospital. The severity of their injuries wasn’t immediately known.

Fitzgerald said four suspects fled in a vehicle. An officer was on the scene quickly and was able to get a description of the suspect vehicle. A lookout bulletin was issued, and the vehicle was spotted almost immediately.

Officers tried to stop the vehicle, but the driver continued on. A pursuit was launched and lasted several miles before the suspects wrecked into a drainage ditch near Tarrant Huffman Road. Three suspects were taken into custody, but one fled on foot.

A large perimeter was set up near Linthicum Street in Tarrant. Police asked residents to shelter in place.

As of 11 p.m., the fourth suspect remained at large.

The shopping center also was the scene of shootings earlier this year and in 2020. Lazonathan Rhodes, 25, was killed and another person was wounded on March 19 after a fight broke out in a store and spilled over to Roebuck Plaza’s parking lot where shots were fired.

In the May 20, 2020 incident, one person was shot but survived. A second person was injured by shattered glass.

“Unfortunately we have had multiple incidents at this shopping center,’’ Fitzgerald said. “Our officers are going to remain vigilant to take those that are responsible for preying on people at our shopping centers into custody. We’re thankful we had officers in the nearby area to take the individuals into custody fairly quickly.”

The homicides are Birmingham’s 80th and 81st so far this year. Of those 11 have been ruled justifiable and therefore aren’t deemed criminal.

In all of Jefferson County, there have been 134 slayings, including the 81 in Birmingham.