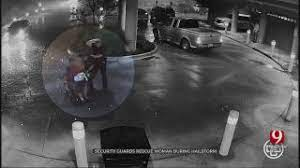 “You could hear it coming towards you like a stampede,” Bishop said.

Becky Husted was in the parking lot to visit her son in the hospital. Bound to an electric wheelchair, Husted said she was stuck outside when the hail moved in because of an issue with her car.

“My ramp wouldn’t come down, so I was stuck out there,” Husted said. “My daughter, I guess, saw it coming. I didn’t. She said, ‘Mom, run to the hospital!’”

Security camera footage shows Husted move towards the hospital while others in the parking lot run for cover.

“I even stopped and prayed, Lord please stop this, this is going to kill me. Because that hail was just hitting so hard,” Husted said.

After spotting her, Brewer and Bishop both ran to protect Husted. Because they didn’t have umbrellas, their bodies were the only cover available.

Both were left with several bruises and minor injuries. Bishop said one piece of hail knocked him in the head, and Brewer said he was left with four or five baseball-sized bruises on his back.

“It felt like I was in a batter’s box,” Brewer said. “We were just trying to hover over her. Trying to cover her up like an umbrella to try to guard her from the hail. Of course, we got bumps and bruises and stuff like that. But like I said, I’d rather us take that damage than her.”

“That’s why I’m here. That’s why I do what I do. That way you can be around people to help,” Bishop said.

“Very thankful they were there. Thankful they decided to come and help rather than flee,” Husted said.