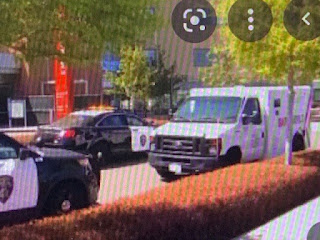 SAN LEANDRO, CA September 8, 2022 A Garda armored truck security officer is in critical condition after he was shot Wednesday morning while carrying an undisclosed amount of money at the Kaiser Permanente’s medical campus in San Leandro, police said.

The unidentified 60-year-old security officer was in critical condition after being shot in the back of the upper torso, and his head, San Leandro police said.

The shooting happened on the campus at 2500 Merced Street at around 11:42 a.m. and the suspect fled the area and has not been caught.

Police stated that they are not sure if he was either picking up money or dropping it off but believe that he had been watched and ambushed.

It was a “robbery gone bad,” said the police. “I don’t know if the robbery happened before the shooting or if the shooting happened after the robbery, but they did leave with an undisclosed amount of cash.”

Officials say they are looking for one suspect. They do not have any leads on where that person may have fled to.

“We’re scouring all the video we can, I mean there are literally dozens of cameras in the vicinity and around the vicinity that we’ll be looking through for more detailed suspect information,” police said.

A portion of the Kaiser campus on Merced Street was on lockdown as a precaution while police collect evidence.

“There is no threat to the area,” police said in a statement.

The shooting suspect possibly ran to a waiting getaway car, police said, and the hospital was placed on lockdown immediately after the shooting.

The security officer had worked for GardaWorld for nearly 40 years, according to police.