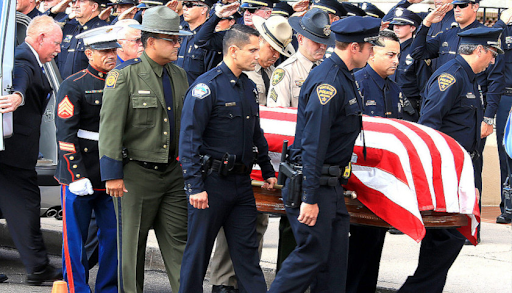 ARLINGTON, Va. Jan 13, 2022 Any officer will tell you that being shot, stabbed or run over are all risks that come with their job, but not since 1930 have as many officers died in the line of duty as in 2021, according to a new report by the National Law Enforcement Officers Memorial Fund.

Our country has lost 458 people that voluntarily signed up to do a job, said Troy Anderson.

Regardless of officer deaths, Anderson says the men and women who choose this profession are steadfast. “They are signed up to do a job, a job that they believe in. a job that they would clearly lay down in their life to do.”

Anderson is a retired Connecticut State Police sergeant who now works as the Executive Director of the Officer Safety and Wellness Program for the National Law Enforcement Officers Memorial Fund, (NLEOMF) a non-profit that among many things, keeps track of officer fatalities.

Anderson says the numbers in the new report speak volumes:

The overall line of duty deaths are up 55%.

Last year there was a 93-percent jump in officers being struck and killed while outside their vehicles.

COVID, contracted in the line of duty, accounted for the most officer deaths: 301 fatalities

We also looked at FBI data and found felonious deaths of officers were up more than 50%. The FBI says unprovoked attacks against officers “continued to outpace all other circumstances of felonious officer deaths.”

NLEOMF reports at least 84 officers were willfully killed by offenders.

One of those officers was Pentagon Officer George Gonzalez.

The FBI reports that Gonzalez’s attacker, 27-year-old Austin Lanz, stepped out of a bus at the Pentagon Transit Center and immediately, without provocation, attacked and killed Officer Gonzalez with a knife.

Texas, Florida and Georgia had the highest number of officers killed in 2021.

The northeast United States, including DC, Maryland and Virginia, had some of the lowest rates of line-of-duty deaths.

According to the Officer Down Memorial Page, a non-profit dedicated to honoring fallen police officers, there were six officers killed in the line of duty in Virginia in 2021, two in Maryland and none in the District of Columbia.

While some communities have had challenges with law enforcement, particularly in the last few years, Anderson says he doesn’t see that as a complicating factor.

“You need law enforcement. It keeps a balance. We need to feel safe, we all need to feel protected.” Anderson says the conversation must go beyond officers and extend to the entire community to achieve a mutually beneficial relationship.

61 officers were killed by firearms

4 officers were beaten to death

3 officers were stabbed to death

21 canine officers died in the line of duty

‹ 34 TSA Security Officers Have Died From Covid-19, 16,883 Have Tested Positive For Virus › Off-duty officer fatally shot while shopping for home with girlfriend in South L.A.; 5 detained