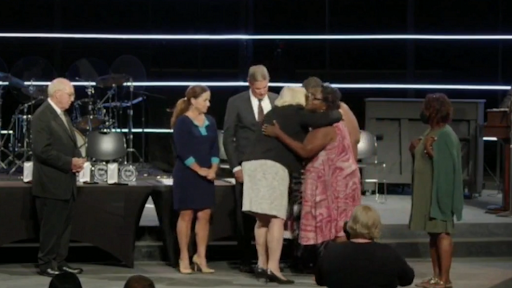 NASHVILLE, Tenn.  Sept 10 2021 The families of six Tennessee law enforcement officers who died after contracting COVID-19 while on-duty accepted awards for their loved ones’ service.

The “Three Stars of Tennessee Award” was presented to families of seven courageous individuals who sacrificed their lives for Tennesseans. Of the seven honored this year, six died of novel coronavirus.

Gov. Bill Lee joined other state officials for the ceremony on Thursday.

Two law enforcement officers died after contracting the virus during outbreaks among staff and inmates at the Shelby County Jail, including Correctional Deputy Jeremy Smith and Captain Anthony Jackson.

Smith started with the Shelby County Sheriff’s Office in 2007 and his family remembers him as a giving person who never met a stranger. His mom accepted his award.

Jackson was a veteran of the Marines and worked for the SCSO for 24 years. He married his junior high school sweetheart and had three children. Jackson’s two sons accepted his award.

Chief Ronald “Ronnie” Gene Spitzer with the Rocky Top Fire Department died in January after contracting COVID-19 from a patient while responding to a medial call for help. Spitzer had over 47 years of service and family says he was “respected by all.” His wife Sandra accepted the award. He also leaves behind two children.

SCSO Deputy Sheriff Ray W. McCrary, Jr. contracted the virus on-duty in July and died a few weeks later. He was with the sheriff’s office for more than two decades and was known as a “dependable guy who you wanted on your side when things got tough.”

Knox County Sheriff’s Officer Toby Kiser also caught COVID while on-duty and had a tough battle in the hospital before reaching a point in which he could not recover. Kiser served in the Navy and Army National Guard. He had just retired in 2017, but returned to the KCSO in 2020. He’s remembered for his kind and generous heart – including donating a kidney to his sister. He’s survived by his wife and four children.

Memphis Police Officer Bobby R. Montgomery contracted COVID-19 when transporting a female prisoner to jail in July 2020 and passed away the next month. Montgomery started showing symptoms of COVID-19 two days after the transport. Montgomery was with MPD for more than 17 years, racking up many officer of the month and year awards. Hi two daughter accepted his award.

In the first half of 2021, 71 law enforcement officials in the U.S. died from the virus — a small decrease compared to the 76 who died in the same time period in 2020, per data compiled by the National Law Enforcement Officers Memorial Fund. Last year, the total figure was 241 — making the virus the leading cause of law enforcement line-of-duty deaths.

MPD Officer Christopher “Scotty” Triplet was also honored Thursday. He died while providing a motorcycle escort for the Memphis Police Department when a car pulled out in front of him.

Another ceremony honoring first responder was held directly after the Three Star Awards. Members from the Nashville police and fire departments were both honored for their work helping folks amid the Christmas Day 2020 bombing.