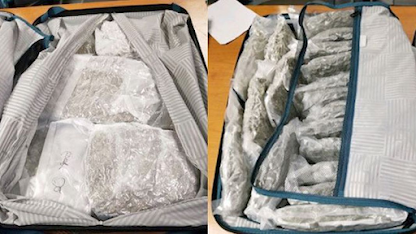 Four people were arrested after their suitcases were found to be filled with 174 pounds of marijuana at the Atlanta airport, police said Friday.

A police dog at Hartsfield-Jackson International Airport sniffed out the drugs after five suitcases were unloaded from a flight from Seattle on May 26, according to Sgt. John Chafee with Atlanta police.

Officers were able to detain four people who retrieved the suitcases, all of which contained marijuana, he said. All four claimed someone else had packed the bag or that they were picking up the suitcase for someone else, Chafee said.

“Our advice is never to travel with a bag that is not yours or one that you do not know the contents of and think twice before agreeing to retrieve someone else’s bag from an airport baggage claim,” Chafee said in an emailed statement.

Nicole Golden, 47, was arrested after retrieving a bag, police said. Golden, of Columbia, South Carolina, was found to be in possession of 21.8 pounds of pot and was charged with trafficking marijuana, police said.

Authorities said Naly Tong, 29, and Keomanyvanh Tong, 33, were also arrested after retrieving one bag each from baggage claim. Additionally, each was found in possession of another bag containing marijuana, police said. Keomanyvanh Tong of Yelm, Washington, was found in possession of 45.98 pounds of marijuana, while Naly Tong of Tacoma, Washington, was found possessing 43.34 pounds, according to police. Each was charged with trafficking marijuana.

Jarvis Sheppard, 32, was arrested after retrieving two bags from baggage claim, police said. He was found in possession of 63.28 pounds of marijuana and charged with trafficking marijuana, Chafee said.

All four suspects were booked into the Clayton County jail. Golden and the Tongs were being held without bond Friday, booking records show. No information was available on Sheppard.

Washington state law allows for marijuana to be legally purchased and used. But it is illegal to take marijuana to another state, according to the Washington State Liquor and Cannabis Board.