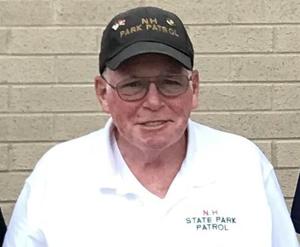 State park patrol worker Michael Hayden doesn’t consider himself a hero for jumping in to help a Hampton police officer make an arrest at Hampton Beach.

Hayden was bitten as he helped subdue the man, but the 70-year-old retired corrections officer didn’t back off.

“In my career in corrections, worse than that has happened to me,” he said.

Hayden was honored with a citizen’s award given by the Hampton Police Department last week for his role in aiding police Detective Robert Kenyon during the arrest on July 16.

Hayden, who issues parking tickets at the beach for the state, said he was walking back to the office when he saw a disturbance.

“The officer was trying to take down this very large man and the guy ended up on top of him. I just jumped in and tried to help,” he said.

The struggle began when Kenyon attempted to make an arrest after an alleged assault at the Seashell complex.

According to court documents, the man arrested was identified as Robert Brown Norton, 55, of Leominster, Mass.

The police complaints allege that during the scuffle with police, Norton struck Kenyon in the left side of his head with his hand, bit Hayden and officer Matthew Robinson on their forearms, and kicked officer Michael Richardson in the thigh.

During the struggle, police said Norton grabbed Kenyon’s police radio from his holster.

“The guy had knocked his radio away and in the process the guy latched onto my arm with his teeth and wouldn’t let go. The officer was able to get his radio back and call for help and then the cavalry came,” Hayden said.

Even after he was bitten, Hayden said he continued to hold down Norton the best he could.

Hayden spent 34 years in corrections in Massachusetts. His career began at the state prison in Walpole, Mass., and he later moved on to the Middlesex County Sheriff’s Office, where he retired as a deputy superintendent.

“Over the years you’ve been in riots and all that kind of stuff. Your training kicks in. It’s just natural,” he said.

Hayden, who’s been working with park patrol for five years, never hesitated to help out when he saw Kenyon struggling to make the arrest.

“If the shoe was on the other foot, he wouldn’t have either,” he said.

After the dust finally settled and Norton was arrested, Hayden said he was taken by ambulance to the hospital to be treated for his bite wound and scrapes to his knees.

Hayden may be retired but said didn’t think about himself that night.

“My wife says I don’t know any better,” he said.
Union Leader