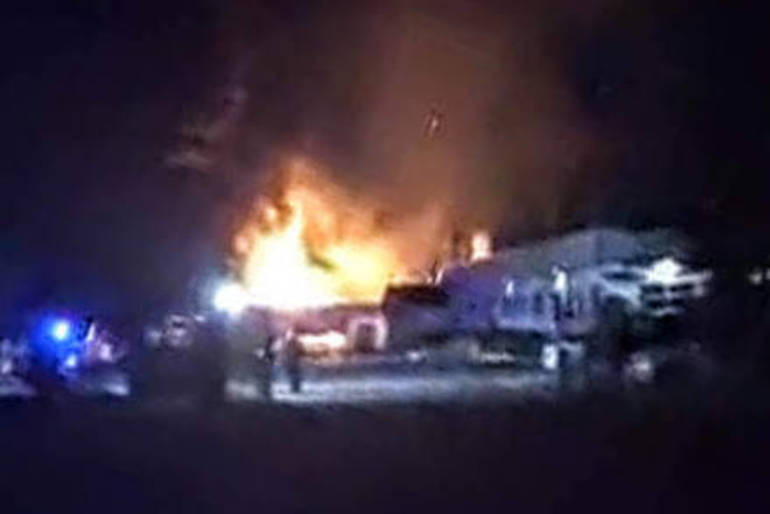 A Holland Manufacturing security guard saw the fire and called 9-1-1 at about 11:40 p.m. Sylvester said. Roxbury Fire Chief Kyle Hoffman, the first firefighter on the scene, encountered “heavy fire on two above-ground liquid tanks,” prompting him to upgrade the incident to 2-alarm status which drew the mutual aid, according to the inspector.

The fire was quickly suppressed using “copious amounts” of water and some chemical fire retardant, said Sylvester. He said a downpour with high winds that hit the area at one point played no part in extinguishing the fire but added an unwelcome level of discomfort for the fire crews.

Sylvester praised the work of those crews, noting the proximity of the flaming tanks to the main plant. About 20 Holland Manufacturing employees were working at the time of the fire, he said.

“Essentially the fire was under control within the hour,” Sylvester said. “None of the main building was damaged at all from heat or fire, so they made a very good, quick stop. They extinguished the fire and contained it to just those tanks very quickly.”

Although the probe will continue, Sylvester said it appears some type of mechanical malfunction initiated the fire at the company, situated on Main Street. He said the blaze caused at least $100,000 worth of damage by destroying two 35-year-old tanks that held the “hot melt” adhesive used by Holland, which manufactures tape and other products.

The incident drew firefighters from all three Roxbury fire companies as well as mutual aid from three nearby departments, Sylvester said. No injuries were reported to firefighters or to Holland Manufacturing workers.

Sylvester said there was no danger of anything exploding, noting the liquid adhesive – while inflammable – is not an explosive substance. He also said the fire likely caused no environmental damage from runoff because the glue tanks are surrounded by a dike system.

“I think we were very lucky that the building didn’t catch on fire,” Sylvester said. “If you had a building fire in that plant it would be very challenging to handle. It’s a very old manufacturing plant – over 60 years old – with many moving pieces.”