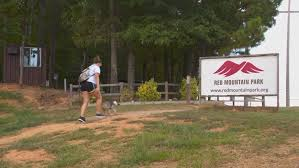 Today we learned for now, visitors are on their own on the trails.

Since Red Mountain Park opened to the public in 2012, park rangers have patrolled the park according to former rangers.

Those rangers also claim they responded to an average of more than 1,000 calls a year.

Days after they were let go, I walked some of the trails and waited to see if I could find if anyone took their place.

For more than an hour, I saw no patrols.

Runners like Mark Montealegre wonder who is going to respond and how much longer it will take.

“I guess there wouldn’t be somebody very close to come along and save them and pull them out of the park.”

Mountain biker Jake Casey, has seen what can happen out on the trails.

First, I was told Jefferson County Sheriff’s deputies would be patrolling.

Then I was told it may actually be Birmingham police officers.

After speaking with Red Mountain park representatives, police and the mayors office, all seemed a bit confused.

Then late Friday afternoon, I spoke with a Birmingham city council member.

The vote to approve officers taking over at Red Mountain Park will take place at the next city council meeting.

We will keep you updated on that decision.

The reason for the park rangers being let go, a decision by the Red Mountain Greenway Recreational Commission, is because city police have better resources and search-and-rescue support.