Alone and left to die. 3 Security Officers in Nine Weeks 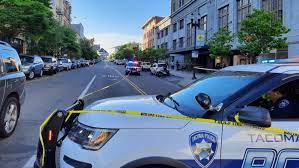 A female security officer who was working alone at a downtown office tower was beaten badly
and left lying on the floor, alone and with no one there to help her.
Another security officer found her the following morning but by then, she was close to dead.

This scene plays out regularly throughout the year. This is the third time in just nine weeks.

Alone, murdered, no one there to help.

Tacoma Police made an arrest in the killing of the security officer, but her family says that’s not good enough.

Now the woman’s sister is speaking out about the deadly attack.

Tina Mack said her sister, Denise Smith, worked for the security company the past five years but was just assigned to the Tacoma office tower where she was killed two days ago.

Mack wants to know how this could have happened and said the arrest still will not bring her little sister back.

“Well, ’Nise was kind. ’Nise was gentle, ’Nise was sweet, she was just loving, just caring, kept to herself, mind her own business,” Mack said, who had parked outside the office tower where her sister died. “I just came here to see the building because i wanted to see for myself.”

Tacoma police did not confirm the 41-year-old woman’s name, but other security officers said Denise Smith was the woman who died, though they did not really know her.

Smith was found by a co-worker around 6 a.m. Sunday still barely alive but died a short time later.

Police has not discussed the circumstances of how she was killed.

Mack said although her sister lived in Tacoma, she had been working in Seattle up until there was an opening closer to home and jumped at the chance.

“She’s only been at this site for two days,” Mack said.

Police arrested a 26-year-old man and are holding him for murder.

Mack appreciates the quick arrest but said it does little to ease the family’s loss.

“That doesn’t bring me no sense of peace, no,” Mack said. “That arrest isn’t bringing her back.”

There was no indication from the police or the victim’s co-workers that the security officer was armed or had any type of two-way radio with her.

A security officer in North Carolina who had been working alone at a closed hotel was shot multiple times and left to die. He also was found by a co-worker coming into work.

And a third security officer was also found dead by workers coming to work in late May.