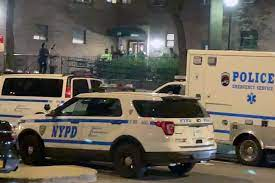 The NYPD has confirmed that a man found shot to death inside a Stuyvesant Town apartment Wednesday in Manhattan was a New York City police officer who died of an apparent suicide — the second NYPD cop to kill himself this month.

The identity of the officer was not released, but police said he was 34 years old, had joined the department in 2013, and was assigned to a precinct in Manhattan. Police did not further detail his role in the department, or his assigned precinct.

He was found by officers sometime after 7 p.m., police said.

Earlier this month, Newsday reported that the NYPD confirmed a Queens precinct commander, Dep. Insp. Denis Mullaney, 44, had been found in his vehicle near Kissena Park April 5 with what was believed to be a self-inflicted gunshot wound.

Mullaney, who was pronounced dead at a local hospital, was commander of the 107th Pct. in North Queens, a patrol area that covers Fresh Meadows and Cunningham Park. It was reported that Mullaney had taken over command of the precinct in September 2020 and had been on the force 20 years, including a stint with the Transit Police. He was a Queens native and a graduate of St. John’s.

The NYPD lost 10 officers to suicide in 2019 and in the wake of those losses the NYPD initiated a number of outreach and intervention programs in an attempt to both identify and help officers suffering from issues that could lead to suicide.