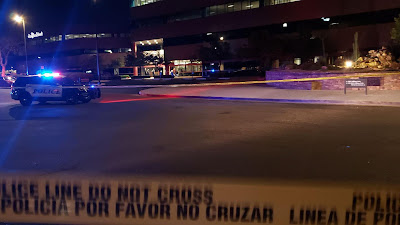 Tucson AZ July 31 2020  A man was fatally shot in a fight with a security guard at an apartment complex on Tucson’s north side Saturday, police said.

About 9 p.m. Saturday, officers responded to a report of a shooting at an apartment complex in the 3800 block of East Fort Lowell Road, near North Alvernon Way, the Tucson Police Department said in a news release Wednesday.

The officers went to a specific apartment where an armed security guard told them he was involved in the shooting.
At the apartment, officers found David Reed, 49, with gunshot wounds, police said.

There was a knife on the ground near Reed, police said.

Reed was taken to Banner-University Medical Center where he was pronounced dead shortly after, police said.

Officers said they spoke with the woman and the security guard the night of the incident.

No arrests have been made and police continue to investigate.