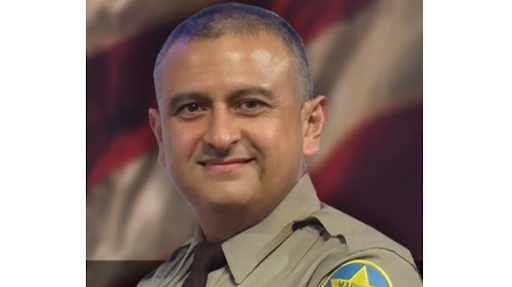 Phoenix AZ October 12 2021 A Phoenix sheriff’s deputy succumbed to his injuries Monday after being beaten unconscious over the weekend.

Juan Miguel Ruiz, a three-year veteran of the force, responded to a call Saturday around 11 a.m. about a suspicious person, later identified as 30-year-old Clinton Robert Hurley, Sheriff Paul Penzone said during a press conference Monday.

The deputies were unable to locate Hurley and returned later that night, eventually tracking him down and taking him into custody around 9:30 p.m.

Ruiz escorted Hurley back to a Maricopa County substation, brought him into the holding area and removed his handcuffs, according to Penzone.

Hurley was “initially passively resistant, then turned on the deputy and a fight ensued,” the sheriff said.

“During the fight, on several occasions, Deputy Ruiz attempted to transmit for assistance on his radio unsuccessfully,” Penzone said. “The suspect beat him unconscious.”

Ruiz was found unconscious and taken to the hospital by paramedics. He was placed on life support and his family is now arranging to have his organs donated.

After the attack, Hurley allegedly stole the keys to Ruiz’s patrol car, crashed through the gate and fled, before eventually stealing another car.

Multiple agencies joined in on the manhunt before officials received a call about a shooting nearby.

There, Hurley had allegedly gone to the home of someone “he’d been in a previous conflict with,” according to Penzone.

It’s still unclear what that conflict was.

Hurley allegedly shot at the resident, and the resident returned fire, hitting Hurley three times. He is currently hospitalized and stable.

Hurley is on probation after being released from prison in December on charges of attempted child molestation.

“Deputy Ruiz’s family needs more than your prayers,” Penzone said. “They need to know that you care about the men and woman who put on badges and uniforms and sacrifice their lives.”