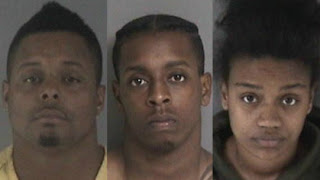 Police in multiple states are reporting an uptick in armored truck robberies and one alarming fact stands out in all of these robberies-violence.

In all of the armored truck robberies, force was used. More specifically, police and the FBI say that heavily armed men were waiting in the shadows for their prey.

These attacks have left one security officer dead and another, shot multiple times.

And there were also two recent arrests of armored truck employees who planned and participated in the robberies and thefts of substantial amounts of cash.

In one of these recent robberies in Houston, police and the SWAT team was in the area monitored an armored truck’s delivery.

A shooting occurred leaving one suspect in the attempted armored truck robbery in critical condition.
It happened at 16100 S. Post Oak near Court Road Friday afternoon.
Police say they were watching three men in a stolen white pickup as they followed an armored truck.
Surveillance video shows the armored truck pulling into Walgreens on S. Post Oak and police say it looked like the guys were about to rob it.
But no one got out of the armored truck and the suspects started to leave.
Police followed and tried to stop them and two people bailed out and ran. The third, police say, stepped out of the truck with an AR-15 and got into a shootout next to the truck. He was critically wounded.
Today that armored car had SWAT officers inside of it, said police. He added that two officers were inside, ready and waiting.

Denver Colorado on November 1st,  three armed and masked men robbed an armored truck in the Greenwood Village. The men lying in wait inside a vehicle, sprung from the car ordering the security guard to the ground with a weapon to her head as the truck was ransacked.
The three robbers then quickly fled in an SUV.
The frightening, lightning-quick robbery happened at about 2:30 p.m. in a parking lot at the Bank of Colorado, 5201 S. Yosemite St., according to the FBI.

The robbers wore black or blue hoodies, masks and sunglasses. Two were armed with semi-automatic handguns, and one brandished an AK-47 variant, the FBI said.
The robbers fled in a 2013 to 2016 gray Nissan Pathfinder, which had a stolen Colorado license plate CVD-251.
Surveillance footage of the crime shows a robber appearing to strip a gun from the guard before taking off.

Police in Luzerne County PA. responded to a shooting call at a business early Saturday morning.
Authorities say that they received calls of gunfire and responded to a business called, Garda World on Stewart Road in Hanover Township Just after midnight.
Garda World is an armored car business police stated in their press release.
According to investigators, the suspects tried to rob a company truck even firing off a few shots but took off before they could get away with anything.
Police report that there were no injuries.
The investigation is ongoing in Luzerne County.

Another attempted robbery with shots fired and a security officer hit near Philadelphia.
It appeared that the armed men had been waiting for the armored trucks arrival.
The suspects left empty handed and police are still investigating.

In Tempe Arizona this week, police and the FBI were called to the scene of a possible armored truck robbery near a Costco store.

What they discovered was that one of employees of the security company was somehow able to off-load nearly $1.2 million dollars from the truck before fleeing.

Now, authorities say that 23-year-old Edwin “Johnny” Jobany Villa who was a Brink’s security employee has been arrested.

Police said that as one employee went into the store, Villa stayed with the armored truck and allegedly disabled the video camera inside the truck.
When the employee came out of the store, Villa and the truck were gone.
Court records show the cash belonged to Costco and various Valley casinos.

The FBI says Villa was located at around 7 p.m. on Monday near 59th Avenue and Camelback Road in Phoenix and taken into custody without incident.
Details on how he was located by the FBI have not been released.

Villa faces four charges including conspiracy to commit theft, two felony theft charges, and unlawful use of means of transportation.

Also, this week, federal law enforcement agents announced the arrest of another armored truck employee and several others involved in a heist that happened in Oakland California in June.

Police said that three suspects have been arrested in a brazen daylight robbery of an armored Loomis truck delivering cash to an Oakland Wells Fargo branch last June that authorities are calling an inside job.
Oakland police said a lengthy three-month investigation has resulted in the arrests of 35-year-old Duane Jackson, his 23-year-old nephew Damien Jackson and 25-year-old Mercadiez Moore.
According to court records, Damien Jackson was the security guard driving the armored vehicle on the day of the robbery and has admitted his involvement.
Duane Jackson and Damian Jackson were being held on second-degree robbery and other felony charges. Moore, who authorities characterize as Damien Jackson’s girlfriend, has been charged with receiving stolen property and third-degree firearm storage.

On June 27 at 10:51 a.m., Oakland police officers responded to an armed robbery report of an armored Loomis truck in front of the 10700 MacArthur Blvd. Wells Fargo Bank location.
The custodian of the armored truck was delivering currency to the bank when two suspects, armed with assault weapons, approached him and demanded the cash. The suspects then fled the scene with more than $100,000 in cash in a red Honda Civic.
Oakland police Lt. Steven Nowak lead an extensive three-month investigation that eventually

“You see it in the movies, I just didn’t think that still happened. I was little bit surprised it was an inside job and family affair,” said OPD officer Jorge Garcia.
Officer Mike Khem said that OPD was initially suspicious of the family connection because the armored truck company said a majority of similar heists are inside jobs.

“The driver was definitely involved–he helped set up the actual heist and the robbery took place and for several months. They probably thought they got away with it,” said Nowak.

Nine search warrants were served leading to the arrest of the Jacksons and Moore and the seizure of 11 firearms including handguns, shotguns, rifles and assault rifles.

Authorities said some of the stolen money was used to buy vehicles and a motorcycle.

As the investigation continues, investigators ask anyone with information to contact the Oakland Police Department’s Robbery Unit at (510) 238-3326.