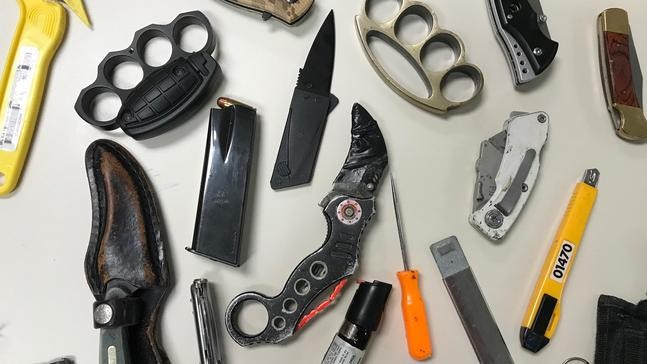 WASHINGTON DC Aug 30 2019 The nation’s 15 million health care workers are increasingly under attack on the job. Advocates and even some federal lawmakers say delays in the creation of enforceable regulations to protect them will continue to put them at risk, potentially for decades.

The very real threat against nurses and doctors is something that played out horrifically at a hospital outside Chicago in May of 2017.
An inmate under the watch of a corrections officer at Delnor Hospital in Geneva, Illinois, stole his gun and fled.
The harrowing moments that followed were captured on dispatch recordings obtained by Spotlight on America.
They paint a stunning picture of what happened as two nurses were taken hostage from the emergency room at gunpoint, prompting a response from the area’s SWAT team. After several tense hours, the suspect was killed by law enforcement.

Following the hostage situation at Delnor, hospital workers returned to the job, scarred by the type of workplace attack that has become a frightening reality.
Workplace violence against health care staff is a problem Spotlight on America discovered is both widespread and impactful, catching the eye of federal lawmakers including Congressman Joe Courtney (D-CT).

“There’s no question the trajectory of the incidents of violence has skyrocketed,” Congressman Courtney said.

In a 2018 survey conducted by the American College of Emergency Physicians, 47-percent of emergency doctors said they’d been physically assaulted at work. A 2015 paper published in Workplace Safety & Health found 62-percent of hospital employees had been targeted by violence. And the Government Accountability Office, prompted by lawmakers, did its own research on the problem. The agency’s 2016 report indicated workers in health care facilities experience substantially higher estimated rates of injury than workers in other fields.

The problem is happening in hospitals, doctors’ offices and clinics across the country, with Spotlight on America finding stories from our affiliates detailing heinous attacks on health care workers. In New Mexico, a man was arrested after pointing a loaded gun at health care workers in Las Cruces in March 2019.

After an attack at Western State Hospital in Seattle in October 2018, a nurse required surgery to reattach part of her ear, bitten off by a patient. And in Hershey, Pennsylvania, in 2018, a patient was charged with attempted rape after assaulting a registered nurse at the Hershey Medical Center.

Behind every headline, there’s a human being who represents hundreds of others whose stories never made the paper or the evening news. Elaine Sherman is one of them. While working as a nurse in the nation’s capital, she says she was attacked by a woman who got angry about her family member’s care.

“I could see that the situation was going really bad, so I was like let me see if I can get in and diffuse the situation,” Sherman explained. “The next thing I know, she punches over my shoulder, knocking the other nurse’s glasses off. Then she starts to just pound me in the face seven or eight times.”

Sherman says she pressed charges and pressed forward, returning to work the following day and becoming an advocate for health care workers’ rights on behalf of the group National Nurses United. She said violence against people in the medical field has begun to feel like it’s almost part of the job.

“We make a joke where we work because we say the nurses need hazard pay, because there’s been numerous people who have been assaulted,” Sherman said. “We should not be subjected to this type of behavior and there’s no accountability for it. We need protection.”

Best practices for battling back against the threat of violence at medical facilities are a common conversation among security personnel nationwide. At the Upper Chesapeake Medical Center about an hour outside Baltimore, Maryland, safety has come into sharper focus following an outside assessment of their practices.

But security staff at the hospital, including Senior Security Supervisor Jim Cannady, were already well aware of the potential for violence against employees. They only have to look at at a bag full of weapons confiscated from individuals entering the hospital for evidence of what is possible without intervention. The contents are instruments of death ranging from brass knuckles to knives, a 15-round magazine to a perfectly balanced ax.

“The patient said they wanted the best care possible,” Cannady explained about the ax. “Just tells me how much society has turned in terms of being dangerous.”

It’s a danger that’s not limited to small hospitals in rural areas. In his annual “State of the Clinic” address, the CEO of Cleveland Clinic, Tomislav Mihaljevic, shined a light on the very real threats against medical staff, saying nearly 30,000 weapons were confiscated last year alone in its northeast Ohio facilities.

“There is a national epidemic of violence against health care workers, especially in emergency departments,” Mihaljevic told the crowd.

The epidemic has hospitals nationwide increasing security budgets and response efforts according to the American Society for Health Care Engineering’s (ASHE) 2018 Hospital Security Survey. Metal detectors, panic buttons on badges, and more police have become standard at many facilities.

At Upper Chesapeake, they’ve also invested in specific training to prepare staff for potential threats. It’s called MOAB, a program developed in the 1980s by a former law enforcement officer from Connecticut. It involves hands-on lessons on how to recognize and manage aggressive behavior. The ASHE survey, which included more than 300 hospitals, found 91-percent were implementing this type of program.

MOAB, according to the Pennsylvania-based company, does the bulk of its training in the health care sector by far. There’s been an increasing demand according to a company rep, who said hundreds of people are trained through the program each year. It’s not just about teaching self-defense. It’s also about de-escalation, which we learned by taking part in a MOAB training event at Upper Chesapeake attended by dozens of new staffers.

Experts say this kind of training is key to protecting front-line health care workers on the job. John Winterstein is the Director of Security Services for Upper Chesapeake as well as another hospital in the University of Maryland system. We asked him about the danger of not being proactive in seeking out solutions to prevent violence in medical facilities. He said, “It could be catastrophic. My worst nightmare is to come in here one day and find out that somebody is hurt seriously.”

“We need to start stepping up our game a little bit and make it a little bit harder for the bad guys to do harm to people,” Winterstein said. “What we’re doing now is really imperative to make that happen.”

Even with an aggressive, proactive effort, Winterstein says the two hospitals he oversees have seen a steady climb in workplace violence since 2017, with more than 600 incidents already this year. They ranged from assaults on staff to aggressive, combative patients that required security intervention. It’s a similar picture at facilities across the country, with workers at risk. “These people are here to help people. They’re people with compassion. For them to get assaulted on a daily basis, is terrible. And it doesn’t have to happen that way,” Winterstein said.

Training and other security measures aren’t enough according to some federal lawmakers and advocates who are demanding regulations to protect health care workers. At the moment, there’s no law requiring hospitals, doctors’ offices or other medical facilities to perform any specific security functions to protect workers. Voluntary guidelines have existed for decades and are widely used, according to Congressman Courtney. But he says the rise in violent incidents is proof those guidelines don’t work.

The Democratic lawmaker is also quick to point out the number of attacks on health care workers is likely far worse than estimates and surveys have shown. That’s because he says there’s no mandatory reporting to the Department of Labor when incidents occur, “So we know the data is still underreported.”

Spotlight on America has learned the solution to this problem could be decades away, thanks to red tape. During a hearing on the issue in May on Capitol Hill, several lawmakers insisted there’s no time to waste with assaults, injuries and even health care workers being killed on the job. Some, including Congresswoman Pramila Jayapal, D-Wash., took aim at former Labor Secretary Alex Acosta.

“Without those enforceable standards, employers cannot be held to account for protecting their workers and yet you’re moving at a snail’s pace on these standard setting measures,” Jayapal said.

Acosta, who resigned just a few weeks after the hearing, fired back, saying, “This is not moving at a snail’s pace. OSHA rules, historically, have taken even longer than this.”

OSHA, the Occupational Safety and Health Administration, is the government agency that has to come up with the regulations, weighing the need for protection against the concerns of the industry tasked with implementing them. History shows the process could take a while. Representative Courtney pointed out it took 17 years to create rules to protect construction workers from cancer-causing silica dust, and two decades for the agency to put limits on workers’ exposure to the toxic chemical, beryllium.

Immediate action through the Department of Labor is an option. And it’s been used previously, as with the AIDS crisis. But barring that, Courtney is pitching a bill to set a time limit on creating firm regulations, hoping to accelerate the process.

“That’s the purpose of administrative agencies is really be agile and to be able to move to protect America’s workforce,” he said.

Courtney says opponents, including the American Hospital Association, have concerns about overregulation that he says he carefully considered in his proposal. He told us, “The goal is just compliance and reduction of violence. Nobody wants to come in with a ton of bricks from the government and overregulate.” The AMA declined our request for an on-camera interview on this issue. Some lawmakers, including Congresswoman Virginia Foxx, R-N.C., have expressed similar concerns about taxing the health care industry with too much regulation. Her office didn’t respond to multiple requests for an on-camera interview, but during the May hearing, Foxx said sweeping regulation shouldn’t be the solution to a problem that boils down to tragic accidents and bad actors.

Security experts on the front lines say this is more than just a few outrageous headlines.

When the Spotlight on America team asked John Winterstein if the country had reached a point where violence against health care workers was an undeniable problem that required action, he responded, “Absolutely. We need some legislation to protect our health care workers.”