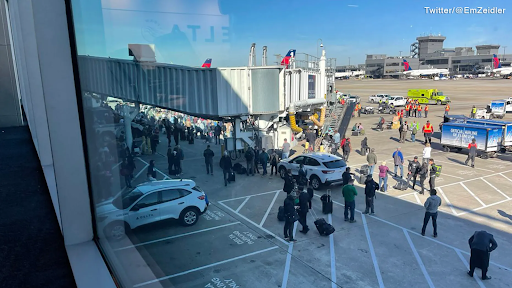 Atlanta GA Nov 21 2021 An “accidental discharge” of a firearm at Hartsfield-Jackson Atlanta International Airport caused chaos for travelers on Saturday.

Officials announced there was not an active shooter, after numerous social media posts indicated that passengers were evacuating parts of America’s busiest airport.

“There was an accidental discharge at the Airport,” the airport said from its official Twitter account. “There is no danger to passengers or employees. An investigation is ongoing, more information will be published on this channel.”

Atlanta Police Sergeant Jarius Daugherty told Fox News the accidental discharge may have been near the main security checkpoint, and that no injuries have been reported.

“Officers are working to determine the circumstances surrounding the incident,” Daugherty said.

Video posted to Twitter from user @JamariJones_ATL shows people ducking and crawling on the ground.

Another user, @kevinhelgren, said he was “walking towards security in Atlanta airport when folks told me to stop walking.”

“Was calm for 5 mins, then everyone started running and screaming. Took train one stop north. Haven’t received info,” he wrote.

A third user, @DianneCallaha16, said she heard screams and sirens while people were boarding a flight to New York.

FlightAware did not show notable delays at Hartsfield-Jackson after the incident.