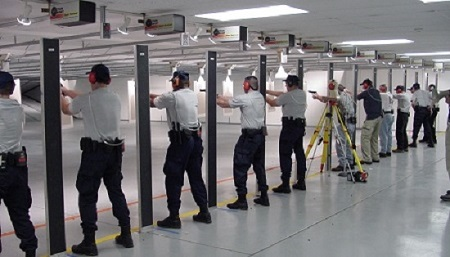 ATLANTA GA June 23 2021 — Several local private security companies are preparing their employees for firearms training after a security guard was shot outside of Lenox Square Mall just over a week ago.

Owners of many of these companies told Channel 2′s Michael Seiden they were shaken by what happened, but were determined to make sure their employees are getting the best training, so they can protect themselves and others if they ever found themselves in a similar situation.

Police say two 15-year-old suspects were trying to break into the Apple store inside the mall when one of them opened fire on the security guard, wounding him in the chest and stomach.

As of Monday evening, Godjuhn Green, an employee of Allied Universal, is still in critical condition as the community continues to rally around him.

Parris Brooks is the CEO of Gridiron Protection Agency, which has been providing security to celebrities, executives and residential and commercial properties since 2016. He says this brazen act of violence has not only left him and his employees shaken, but many clients as well.

“We are getting calls from a lot of clients. They’re [wanting] to add more services or armed services now because you can’t walk out the door without crime happening,” Brooks told Seiden.

Brooks is now requiring all his officers to undergo monthly training, including firearms for those who want to carry while on the job.

“We are going to go to a monthly defensive tactic training, weapon retention for our armed guys, deescalation…Dealing with people these days, you gotta know how to talk them down and ease a situation down because you never know what you’re going to run into,” he said.

“We cannot find words strong enough to condemn this violent and unprovoked action against a valued member of our security team who was providing after-hours patrol outside the mall.”

Since last year, Channel 2 Action News has covered six shootings at the mall. Since then, officials say they have added a weapon detection system at the entrance that alerts Atlanta police if it detects a weapon.

Seiden reached out to APD on the number of weapons detected or seized in the last year, but was not able to get those numbers.