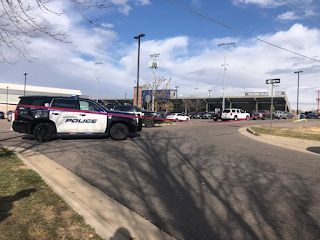 AURORA, Colo. November 21 2021 Three juveniles are in the hospital after a shooting in the parking lot of Hinkley High School in Aurora, but the city’s police chief says a school security officer’s heroic actions may have kept the situation from being worse.

“I do want to applaud his actions. He did a great job here today,” Aurora Police Chief Vanessa Wilson said.

According to the chief, the officer “heroically” returned fire during the shooting and then applied a tourniquet to one of the students who was shot.

All three people who were shot, two Hinkley students and one student from the Avenues alternative school, are expected to survive.

Without specifying which student, Wilson said one of them is believed to be a suspect.

According to Wilson, security at all of the city’s schools has been increased since a shooting at Nome Park on Monday left six Central High School students injured.

This allowed for a quick response from security at the scene and city police.

“Our SROs quickly responded and I want to thank the men and women of the Aurora Police Department that, as you can see, responded here quickly and were able to lock the school down and make sure that we had the students inside safely,” Wilson said.