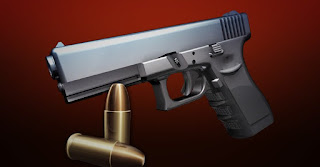 On Oct. 4, 2017, three officers with the Bellevue, Washington, Police Department had flown from Houston to Seattle on United Airlines. Upon their arrival back in Washington, they noticed and reported their service weapons had been stolen.

Approximately one month later, authorities had pulled Stewart over for a traffic violation, at which time he was found in possession of one of the three stolen guns. Stewart later admitted he stole the guns while he was as a contract employee working at Bush Airport as a baggage handler.

Chief U.S. District Judge Lee H. Rosenthal will impose sentencing on Sept. 11, 2018. At that time, he faces up to 10 years in federal prison and a possible $250,000 maximum fine. He was permitted to remain on bond pending that hearing.

The Bureau of Alcohol, Tobacco, Firearms and Explosives, FBI and the Houston Police Department are conducting the investigation. Assistant U.S. Attorney Sam Brown IV is prosecuting the case.

Robbery, shots fired during armored truck robbery in Mobile Alabama was all staged