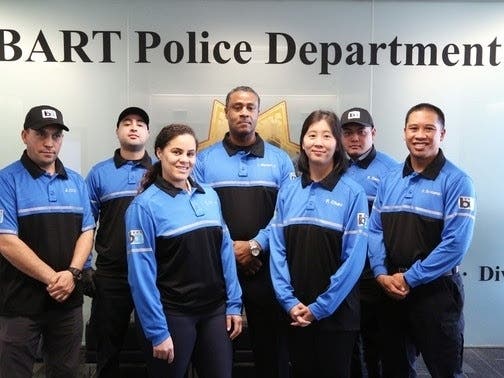 The six-month pilot ambassador program will cost the transit agency $690,000 and was approved last month in response to concerns about safety aboard trains.

The ambassadors were recruited from the ranks of BART’s police community service officers. They completed de-escalation and anti-bias training on Friday, BART officials said.

“This team will be police employees and trained to provide a sense of safety and security for our riders on-board trains and deter crime,” BART Police Chief Ed Alvarez said in January after the BART Board of Directors approved the program.

The unarmed ambassadors will ride trains from 2 p.m. to midnight seven days a week, with extra coverage on Saturdays.
The program will focus on the most heavily traveled route — the trans-bay corridor, between the 12th Street Oakland and San Francisco Civic Center stations.

During the busy evening commute, the ambassadors will walk trains on other portions of BART routes, including Oakland Coliseum to Union City, and Walnut Creek to Pittsburg/Bay Point.

The ambassadors are trained to answer riders’ questions and will have radios to report security issues and biohazards.

When police are needed, the ambassadors will call an officer, BART officials said.

‹ Long Island night club arrests made for drugs, no security license › First-grade teacher arrested for trying to buy meth while at school