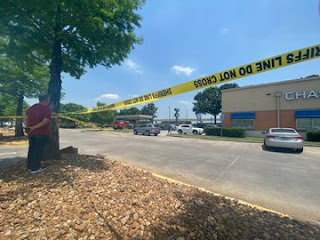 HOUSTON TX May 7 2022 – An armored car guard was transported to the hospital Friday after being shot by a robbery suspect in the parking lot of a Chase Bank in north Harris County, deputies said.

It happened in the 10300 block of the North Freeway and West Road.

According to the Harris County Sherriff’s Office, a Brinks armored truck guard was servicing an ATM machine when he was approached by two armed men.

Deputies said the guard who was servicing the ATM was shot by one of the suspects while the driver of the Brinks truck was being held at gunpoint by the second suspect and unable to get out of the truck.

An off-duty HPD working security outside of the bank witnessed the crime and started shooting at the suspects, according to investigators.

The Brinks employee who was shot was transported to the hospital with a gunshot wound to his arm. He is expected to survive.

The suspects remain on the loose.