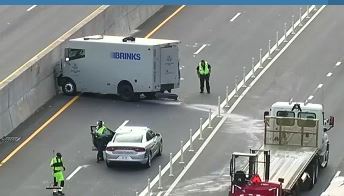 The Brinks armored truck crashed into a Jersey barrier in the toll lane area of the Interstate causing immediate back-ups.

First responders from the Cornelius and Huntersville fire departments responded to the accident scene in the southbound express lane at the Westmoreland Road overpass shortly before 11 a.m.

The security personnel were not seriously injured.

A second armored truck was called in and off loaded the contents of the truck as traffic crawled by the accident scene.

The scene was cleared up in less than an hour an officer said.