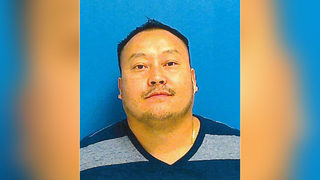 CLAREMONT, North Carolina Jan 31 2018 — The husband of a Catawba County police dispatcher has been arrested after narcotics officers found 65 pounds of marijuana in their home.

Blong Ly Vang was arrested Tuesday after investigators executed a search warrant at his home in the 4600 block of Belvedere Drive in Claremont, WSOC reports.

Records show Vang’s wife worked as a dispatcher with the Hickory Police Department.

Police said Vang and his wife allowed them to search the home, but revoked consent after three pounds of marijuana were found.

Authorities applied for a warrant and conducted a second search of the home.

Officers said a handgun reported stolen from Georgia was also found, along with digital scales, a vacuum sealer, and another weapon.

The marijuana had a collective weight of about 65 pounds and a minimum street value of $130,000.

Vang is being held at the Catawba County Detention Facility under a $250,000 secured bond.

Hickory police said Vang’s wife is no longer employed with their department and that an internal investigation is underway.