CBP Officers Seize Over $1.5 Million Worth of Drugs at the Hidalgo Port of Entry 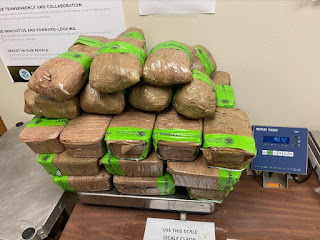 “These significant seizures of hard narcotics not only illustrate the firm commitment of our frontline CBP officers to carry out CBP’s border security mission but show how their important work helps to protect our communities from illegal narcotics,” said Port Director Carlos Rodriguez, Hidalgo/Pharr/Anzalduas Port of Entry.

The first seizure occurred on Friday, Jan. 7 at the Hidalgo International Bridge when a CBP officer referred a 2016 Nissan March driven by an 18-year-old male United States citizen who resides in Reynosa, Tamaulipas, for a secondary examination. Upon a canine and non-intrusive imaging inspection by CBP officers, a total 38 pounds of alleged cocaine and 448 grams of alleged fentanyl were discovered.

The second seizure occurred on Tuesday, Jan. 4 at the Hidalgo International Bridge when a CBP officer referred a 2010 Chevrolet Silverado driven by a 42-year-old male United States citizen who resides in San Antonio, Texas, for a secondary examination. Upon a canine and non-intrusive imaging inspection by CBP officers, a total 90 pounds of alleged methamphetamine was discovered.

The narcotics have an estimated street value of $1,575,995 combined.

CBP officers seized the narcotics and the vehicle. Both drivers were arrested, and the cases were turned over to U.S. Immigration and Customs Enforcement-Homeland Security Investigations (ICE-HSI) special agents for further investigation.

Armed Michigan woman who ‘wanted to talk’ to Capitol Police about Jan. 6 riot is arrested in D.C

‹ Police searching for security guards who shot 2 men at Houston nightclub and then fled › Correctional officer arrested for having sex with a minor in Kingsburg, police say