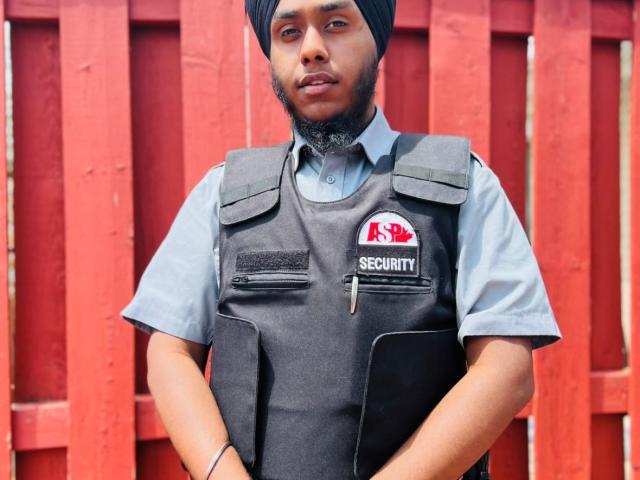 Toronto Canada July 7 2022 On Monday evening, the City of Toronto issued a statement saying that the security guards would be reinstated. The story has been updated to reflect that.

The City of Toronto is working with private security firms to reinstate more than 100 Sikh men who lost their jobs as guards due to a municipal policy that requires them to be clean shaven so they can wear properly fitting N95 respirators while working.

They made the announcement in a release issued Monday evening, following press coverage of their policy the World Sikh Organization of Canada had called “absurd.” The organization, which had advocated for months on the behalf of laid off security guards, said the men were being punished for their faith, which requires them to grow their facial hair.

“If you asked me to clean shave off my beard, it’s something like asking [another] person to peel off his skin,” said Birkawal Singh, who was laid off from his position as a security guard at one of the city’s 24-hour respite shelters last month. “It’s really humiliating and devastating for me.”

Mr. Singh was employed for two months by ASP, a private security contractor used by the city. In the two years prior to that, he had worked at several other private security firms. At each of those jobs, his employer and the client were satisfied with him wearing blue surgical masks, he said.

In mid-June, ASP started enforcing the city’s “clean shave policy,” which had been introduced in January. The company told Mr. Singh that if he wanted to continue working at the shelter he’d have to remove his beard.

Mr. Singh said ASP offered to reassign him to a site that would not have required him to wear a fit-tested N95. But the new position would have paid minimum wage – markedly less than he had been making. He declined the transfer.

In internal correspondence that was shared with The Globe and Mail, a manager at one Toronto security company told its team of security guards that security staff employed by the City of Toronto had performed compliance checks on contractors and noted which ones were not clean shaven. The manager said the city had deducted almost 200 billable hours from his company for non-compliance.

He explained to his employees that, if they showed up for work without being clean shaven, they would be sent home immediately without pay.

On Monday evening, the city issued a press release saying it had directed security contractors to “accommodate their employees who have requested religious exemptions and to reinstate any employee whose employment was terminated, immediately.”

The release said no contract employee would be prevented from working due to masking policies and, if necessary, would be placed at shelters that were not in outbreak.

According to Don Peat, a spokesperson for Toronto Mayor John Tory, Mr. Tory had asked city staff to investigate the policy after receiving a complaint from the World Sikh Organization of Canada in mid-June. Mr. Peat said the mayor followed up with staff members this week with a request that they work with contractors to “immediately resolve this issue.”

Hours before its announcement that all laid off guards would be reinstated, city spokesperson Erin Whitton told the Globe and Mail in a written statement that the dispute was one between the security guards and their private employers, not the City of Toronto. She said the city was investigating a complaint that certain security contractors “failed to accommodate their own employees.”

She confirmed that the city’s Shelter, Support and Housing Administration requires staff and contractors who may come into contact with people who have or are suspected of having COVID-19 to wear N95 respirators. But she added, without offering specifics, that the department’s policy allows contractors some flexibility.

“Employees of contractors who seek accommodation should have the requests assessed, in accordance with the contractors’ own human rights policies,” she said.

In an e-mailed statement, Isabelle Panelli, a spokesperson for GardaWorld, one of the city’s security contractors, said all its employees who did not meet the city’s requirements “were offered other and equivalent opportunities within the organization until this measure is lifted.”

ASP could not be reached for comment, and neither could STAR Security, another security employer whose Sikh staff members lost their jobs.

The World Sikh Organization of Canada said it had heard from several security guards that offers of accommodation from their employers were essentially demotions: they were offered positions with less pay or less seniority, like Mr. Singh was. Some were simply laid off.

Many of the impacted guards came to Canada from India as international students, and their employment was key to their applications for permanent residency, said Balpreet Singh, the World Sikh Organization of Canada’s legal counsel.

This isn’t the first time during the COVID-19 pandemic that Sikh men working front-line jobs have encountered challenges related to their beards and wearing appropriate protective equipment. Many police forces adapted quickly to accommodate Sikh and Muslim employees. In March 2020, the RCMP required all its members to be fitted for N95 masks. But the force walked back that decision six months later, after a campaign by the World Sikh Organization that prompted media coverage.

In this latest case, the organization focused its attention on appealing to the city, the mayor and city council members, rather than putting pressure on the security companies.

“At the end of the day, these are businesses,” said the World Sikh Organization of Canada’s Mr. Singh. “If they’re losing money as a result of these people continuing on in their job, they know the solution is to remove them from their jobs.”