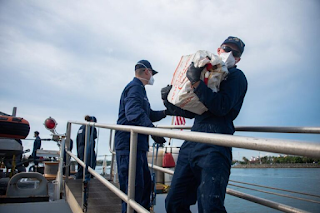 The drugs were interdicted in the international waters of the Caribbean Sea by crews from:

“Interdicting drug traffickers on the open ocean is challenging work and every interdiction is complex and unique,” said Cmdr. Justin Nadolny, commanding officer of Thetis. “This offload is a testament to the teamwork and devotion of every crew assigned to carry out this mission, and it showcases the strength of the valuable international partnerships united to combat transnational organized crime.”

The fight against drug cartels in the Caribbean Sea requires unity of effort in all phases from detection, monitoring and interdictions, to criminal prosecutions by international partners and U.S. Attorneys’ Offices in districts across the nation.

During at-sea interdictions, a suspect vessel is initially detected and monitored by allied, military or law enforcement personnel coordinated by Joint Interagency Task Force-South based in Key West, Florida.

The law enforcement phase of operations in the Caribbean Sea is conducted under the authority of the Seventh Coast Guard District, headquartered in Miami.

The interdictions, including the actual boardings, are led and conducted by members of the U.S. Coast Guard.

The Thetis, a 270-foot Famous-class medium endurance cutter, is homeported in Key West and patrols the Caribbean Sea and the Gulf of Mexico, performing counter-drug operations, migrant interdiction operations, search and rescue, and fisheries enforcement.