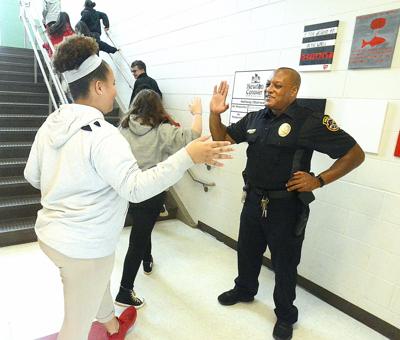 Conover Police Sgt. Danny Baker, school resource officer at Newton-Conover Middle School, is known as the guy who gives the students Pop-Tarts. Now he is also known as the 2019 Floyd Ledbetter National School Resource Officer of the Year.

Baker said he started giving Pop-Tarts to the students after sitting down with a student who never had name-brand Pop-Tarts before. He gave the kid a Pop-Tart and word spread quickly. Baker now keeps a stash of the pastry snacks and offers them to any kid who asks.

“For some kids, their last meal of the day is lunch here,” Baker said. “That’s a way of life for them. So I keep Pop-Tarts here for them.”

Baker’s cousin is the school resource officer (SRO) at Bandys High School. Baker was inspired by him to take on the SRO position at Newton-Conover Middle.

“I’ve always enjoyed mentoring kids,” Baker said. “Being a police officer is a calling for your community. When I came here, everything just feels right.”

Baker has been at Newton-Conover Middle for five years.

Baker said he believes in having a good relationship with the students of Newton-Conover. At the beginning of each school year, Baker attempts to meet with as many students as he can.

“They are going through a lot,” Baker said. “Sometimes it’s just a matter of trying to put a smile on their face.”

Baker said by establishing a relationship with the students ahead of time, he can better help them when a situation does happen.

“When I have to go remove a kid from a class, I ask them, ‘So what’s going on? Let’s hear your side of the story,’” Baker said. “It might be a bunch of b.s. but I’m listening. I don’t criticize. That’s all they want is someone to listen. We can always figure out what happened later.”

“To be a true SRO, you got to be involved and interact with the kids,” Baker said. “You can make a difference.”

Baker said he plans to stay at Newton-Conover Middle School until the day they run him off.

“It’s a dream job,” Baker said. “I get to interact with the kids and be a police officer.”

Baker was nominated by the faculty of Newton-Conover Middle School.

Baker will officially receive his award in Pigeon Forge, Tenn., on June 23.