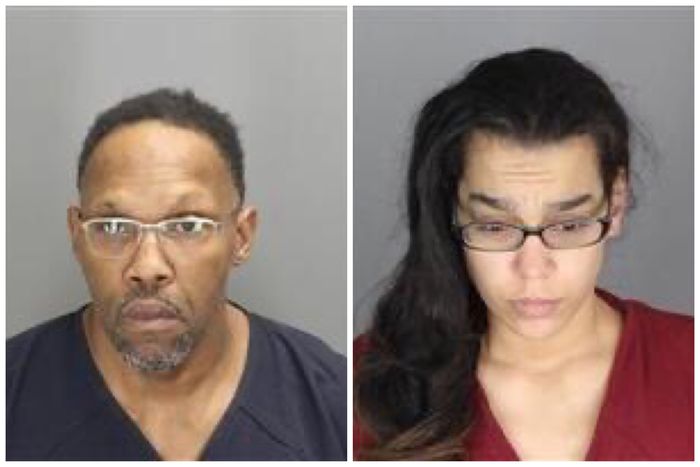 LYON TOWNSHIP, MI May 21 2020– A man and woman are facing charges related to impersonating law enforcement along with weapons and drug charges after officers allegedly found police-style equipment in the vehicle they were driving.

A Oakland County Sheriff’s Office K-9 unit found a clear dash bar with police-style lighting, a handheld police scanner, a windshield-mounted video camera, a handheld spotlight, a police-style badge, handcuffs, a 9mm semi-automatic pistol, a starter pistol and multiple loaded magazines, WXYZ Detroit reports. They also discovered a plastic straw that is suspected to be coated in cocaine residue. In addition, the vehicle had a U.S. Army Military Police emblem on the rear window.

51-year-old Leonard Charles Harris, a convicted felon, and 24-year-old Leanne Paige Garcia-Stowe, both of Lyon Township, were arrested, charged, arraigned and then released on bond in the relation to the case, according to the Oakland County Sheriff’s Office.

On Saturday, May 16, sheriff’s deputies pulled over a black 2010 Dodge Durango that appeared to be trailing a detective in a mobile home community, WXYZ reports. They noticed a police-style light on the vehicle, which prompted them to make a traffic stop. The detectives recognized Harris as a convicted felon; he has a prior murder conviction. Garcia-Stowe and two children, ages 1 and 2, were also in the vehicle, the report said. The children were turned over to family at the scene.

Harris, who allegedly was driving the Durango, later admitted to deputies that he used the police-style equipment in Metro Detroit, the report said. He is charged with weapons and ammunition possession by a felon, possession of cocaine, and use/possession of flashing lights.

Garcia-Stowe is charged with possession of cocaine and carrying a concealed weapon, the report said.

Anyone who encountered the suspects as they were allegedly posing as law enforcement is asked to call Crime Stoppers at 1-800-SPEAK-UP. Tipsters will remain anonymous. There is a $1,000 reward.

Retail thief imprisoned after posing as cop in East Peoria