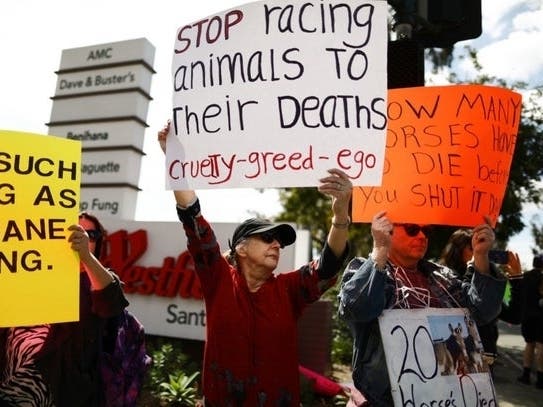 ARCADIA, CA October 7 2019 — Animal-rights advocates protesting against horse racing at Santa Anita Race Track lost a round in court Thursday when their request to protest in non-ticketed areas was denied, Thursday. Protesters were allowed space to gather at the park, just outside of gate 5, so that they can express their views in a public setting.

A non-jury trial on the same issues will be held later, but the judge has yet to set a date.

Since December of 2018, 32 racehorses have suffered life-ending injuries inside the Santa Anita Race Track facility. Los Angeles Superior Court Judge Richard Fruin said that Santa Anita Park and Race Track “has a legitimate reason both to maintain guest safety, and to facilitate foot traffic.” Matthew Strugar, attorney for the protesters, disagreed. In his opening remarks, Strugar stated that the protesters wanted to state their case where race horses died, and “not out front of the park.” Strugar’s clients sought the preliminary injunction because they plan to be present during the Breeders’ Cup on Nov. 1-2.

Attorney Emily Evitt — who represents the Stronach Group, which owns several racetracks, including Santa Anita — argued her clients have a “fundamental right to exclude” protesters from their property. She added that the group that demonstrated against the animal deaths on March 3 was “extremely disruptful” to traffic.

In a complaint filed May 30 against Stronach, eight protesters trying to pass out leaflets in the parking lot and public walkways outside of the track on March 3 were “battered and imprisoned” by track security guards.

Dina Kourda, a ninth plaintiff, contacted Santa Anita Park representatives to request information on how she could lawfully hand out leaflets promoting a plant-based diet. Kourda says she was “denied any details from the park’s community services office,” the suit states.

Along with injunctive relief, the suit seeks unspecified compensatory and punitive damages.

During the March protests, the protesters carried megaphones and posterboard signs with slogans that denounced the park. One person wore a body camera-type video-recording device, the suit states.

Two groups of security guards blocked the plaintiffs as they tried to walk to the admissions area, the suit states. They did not try to prevent access to other members of the public.

A park employee, not in uniform, grabbed one plaintiff by one arm and removed her camera. He then “threw it to the ground, and another guard handcuffed her,” the suit states.

The same two employees ripped a sign from another plaintiff who also was handcuffed, the suit states. Three plaintiffs who tried to record what was happening to their two colleagues were blocked from doing so by guards using their hands and bodies, the suit states.

Three plaintiffs were later cited by Arcadia police for alleged trespassing, but no charges were filed, the suit states.