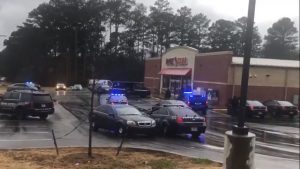 DEKALB COUNTY, Ga. Jan 31 2019
A customer of a Georgia Family Dollar store interrupted a robbery and fatally shot the suspect according to police.
Police reported that a man walked into the store on 7042 Covington Highway and pulled a gun on two employees.
While the suspect was getting money from an employee, a customer saw what was happening and shot the man, police said.
The customer who shot and killed the gunman will not be charged, police said.
Police told Regan the clerk was badly shaken by what happened but appreciative of the customer who put a stop to the armed robbery by taking out the threat.
“She’s upset. She’s dealing with corporate right now… but she’s fine,” said Sgt. Lynn Shuler with the DeKalb County Police Department.

Police have not released the name of the customer who intervened or the gunman who was shot.