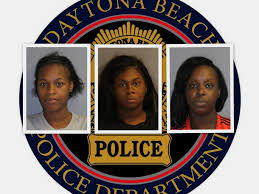 Daytona Beach FL June 29 2017 Three women police said were on a shoplifting spree hit Daytona Beach stores stealing more than $10,000 in merchandise before being caught by police inside the Volusia Mall and arrested.

The three Tampa women, Ronesha Grecham Toliver, 24, Earnisha Williams, 23, and Raven Wimbush, 26, were corralled inside Volusia Mall on Monday night after police converged at the shopping complex and had officers guarding every door. The women were actually continuing their retail theft binge after stealing at stores on several other stops, including at the Tanger Outlet a few miles away, investigators said.

Daytona Beach police spokeswoman Lyda Longa said Tuesday they were not aware if the women were operating all over the state.

“We do consider them a retail theft ring for our city,” Longa said.

The women entered the stores with empty shopping bags and purses and walked out with them full of merchandise. At one store, an employee confronted Williams, who had a rolled up shirt hidden under her clothes. Williams told the store worker that “it’s a colostomy bag,” police reports state.

Police were first called at 6:30 p.m. Monday to the Tanger Outlets, 1100 Cornerstone Blvd., where the three women had taken more than $1,000 in merchandise from the Gap Factory Store.

While police were investigating the theft at the Gap, they learned that the three women had also walked into the OshKosh B’gosh store where they stole $102 worth of merchandise and along the way, by now on International Speedway Boulevard, hit the Total Wine & Spirits store where they took bottles of tequila valued at $350.

The women continued to leave a trail of victimized businesses when they entered the Old Navy on ISB. There, police said the women took $2,585 in goods.

Police gave out descriptions of the women and that of the black Nissan car they were driving and alerted security at the Volusia Mall. Shortly after, Volusia Mall security called police after spotting the women, reports state.

Police immediately secured the Volusia Mall and when officers entered the shopping complex on West International Speedway Boulevard, they found the Tampa women at JCPenney where they were arrested.

Williams had more than $4,000 in perfume and clothing from Volusia Mall stores in her bag. In all the women stole from six stores and the total value of merchandise stolen was at least $7,500, police said.

Williams and Wimbush were being held Tuesday on $30,000 bail each while Toliver was in jail without bail.

Park Central Mall in Phoenix gets a robot security guard