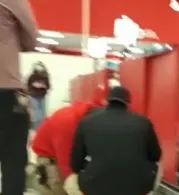 Four suspects wanted for an unarmed robbery last week at the Dearborn Heights Target store, 26650 Ford Road, are in custody with a nearby police department for an unrelated crime.

Dearborn Heights Police Chief Jerrod Hart said they anticipate having an opportunity to interview the suspects for the Target robbery soon.

The chief said police officers were dispatched to the store at 5 p.m. April 30 when a store security officer was assaulted after he tried to detain four men who were trying to conceal electronic merchandise.

The suspects fled in a gold Taurus.

The 36-year-old security officer was found bleeding profusely from head injuries. He was treated at an area hospital and has since been released.

Based on eyewitness testimony and surveillance camera footage, the suspects could face charges of unarmed robbery.