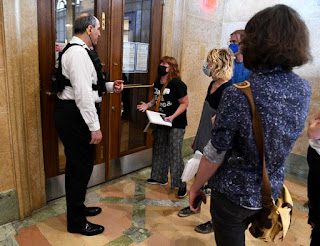 The Des Moines City Council on Monday will consider whether to more than double the value of its contract with a private security firm whose CEO has referred to participants in racial justice protests in the city last year as engaging in “terrorism.”

On his Facebook page, he also referred to members of the local Black Liberation Movement as “little sissy b******.”

The references were made by Tom Conley, president and CEO of The Conley Group, in emails to city officials, which the Des Moines Register obtained under Iowa’s open records law, and on his Facebook page.

If approved, the city will allocate a total of $550,000 toward the firm’s security services — a $300,000 increase, according to the City Council agenda for Monday’s meeting.

The company has a longstanding relationship with the city and other public agencies across the metro, including the Des Moines Police Department, which provides training to Conley’s security officers through the Des Moines Regional Police Academy, Conley’s contract proposal says.

On at least four occasions, Conley sent emails over the summer of 2020 that criticized the Black Lives Matter movement and other racial justice protesters, the records reviewed by the Register show.

“My view is what they are doing meets the old definition of terrorism,” Conley wrote about Des Moines Black Liberation Movement activists in a June 22, 2020, email sent to Des Moines Police Chief Dana Wingert, Assistant Police Chief Allan Tunks and Polk County Sheriff Kevin Schneider. “That is exactly what it is when a mob of violent people intimidate individuals or businesses with implied threats in an attempt to interfere or interrupt commerce. Perhaps the U.S. Attorney should take a look at this issue and start with indictments.

“I know it is hard, but please do not let these criminals get to you.”

According to arrest records previously obtained by the Register, no one arrested during last year’s protests in Des Moines was charged with terrorism.

Des Moines and West Des Moines city officials could not immediately be reached for comment. A spokeswoman for West Des Moines Community Schools said Sunday that whenever any allegation “such as this arises, we consider it to be very serious and will follow-up with our own internal procedures to investigate.

“We will then take any appropriate action regarding our contract with Conley,” she added.

The Des Moines City Council first discussed increasing security measures in city buildings in 2019 after a public works employee killed 12 people at the city hall in Virginia Beach, Virginia. In response, the city awarded a temporary contract with the Conley Group in January 2020 and a longer-term three-year contract in October 2020, after the Conley Group was the only security firm to bid on the project in September.

Also last month, the city amended its contract with the Conley Group to include security at the Argonne Armory Building and Municipal Service Center. On Monday, the council will vote on a proposal to increase how much it pays the company to cover the costs of securing the two additional buildings as well as increased security at the Dico site.

The city is proposing to spend $90,000 each for security at the Argonne Armory Building and Municipal Service Center; the rest of the increase would go toward 24-hour security at the Dico site, where building demolition and redevelopment are planned.

Members of both groups were vocal at the council’s virtual meetings, attending them in large numbers over the last year.

And they’re concerned about Conley’s remarks about them in his emails to Wingert, Cavil said Friday, particularly since some members of the Des Moines Black Liberation Movement have seen Conley armed at recent City Council meetings.

“He’s a racist individual who clearly has a preconceived notion of us and people who protest for racial justice,” Cavil said of Conley’s email to Wingert calling protesters’ activism “terrorism.”

“I don’t think he should be anywhere near residents who are coming to City Council meetings … He should not be given a cent of our taxpayer dollars,” he continued.

Conley said Friday he has no recollection of sending the emails, but stood by his opinion that last summer’s protests should be considered terrorism.

“I literally have no recollection of it, but we have a very good record of service, and everybody has a First Amendment right,” he told the Register. “If somebody doesn’t want to do business with me because of my opinions, then don’t … I’m just a candid individual.”

Tom Conley, CEO of the Des Moines-based Conley Group, sent Des Moines Police Chief Dana Wingert an email on Thursday, June 4, 2020, with a subject line that read “Antifa in action” and, in the body of the email, described two men depicted in an attached photo as “thugs.”

The Register requested hundreds of emails last summer, during the height of racial justice protests. Aside from suggesting local activists had engaged in “terrorism,” Conley — through his company email — sent Wingert and other city officials numerous emails.

June 4, 2020: Conley forwarded Wingert an email from ActiveCampaign, a customer experience automation company, that included the line, “Black Lives Matter,” writing, “Good to know — We will never use ActiveCampaign services again.” He sent another email on the same day with a subject line that read “Antifa in action” and, in the body of the email, described two men depicted in an attached photo as “thugs … planning to commit damage with bricks,” adding it’s “not helpful for one of them to strike the other one in the head with a brick.” The photo appears to be a screenshot of a gif from gif-finder.com that shows a pair of men approaching a building and throwing bricks at it.

June 8, 2020: Conely forwarded Wingert an email from PetSmart in which the company announced “plainly and unequivocally that Black Lives Matter” and pleading “to do our part to ensure that this is our truth.” In an email to Wingert, Conley wrote, “PetSmart should be ashamed of themselves” and “PetSmart is now on the list of places where I will NOT be shopping.”

June 22, 2020: Conley called Des Moines activists “rioters” in an email to Wingert and other city officials before proceeding to call their advocacy “terrorism.” “My guess this is retaliation by the rioters for towing their illegally-parked vehicles,” he wrote after the Des Moines Black Liberation Movement had announced potential plans to protest at Crow Tow, which has the contract to provide towing service for the city.

Other emails sent to Wingert include numerous claims of “antifa” activity across the country. An October 2020 Associated Press review of hundreds of arrests nationwide at racial justice protests after Floyd’s murder found that “very few of those charged appear to be affiliated with highly organized extremist groups, and many are young suburban adults…” In reviewing thousands of pages of court documents, the AP found antifa mentioned in connection with only one case, in Boston.

Based on the records obtained by the Register, it does not appear that Wingert replied directly to Conley via email.

After sharing the news that Des Moines activists had been banned from the Iowa Capitol Building for one year, a commenter suggested the Des Moines Black Liberation Movement be labeled a terrorist group, and Conley replied, “YES!”

In replies to other comments on the same post, he says “police showed an AMAZING level of restraint with these snot-nosed, punk-@$$ed, basement dwellers” and called the local Black Liberation Movement a group of “nothing but weak, punk-***ed little sissy b****** who live in their parents basement,” adding, “They can’t start a lawnmower let alone a movement.” He also says, without evidence, “I heard they are being paid anywhere from $15.00 per hour to $25.00 per hour.”

He wrote “Finally…” in a post sharing the news of the arrest of local activist Matè Farrakhan Muhammad, who was previously known as Matthew Bruce.

According to Conley’s biography on the Conley Group’s website, the former police captain retired from the U.S. Navy after a 27-year career. According to the Iowa Civil Rights Commission, Conley also served on that commission from 2012-2017.

Conley wrote that his company has provided armed security services at West Des Moines City Hall for about three years and has provided services to West Des Moines Community Schools for about 38 years, including mobile patrol services and four security officers at Valley High School, another officer at Valley Southwoods and still another at Stilwell Middle School, according to his proposal.

Conley wrote that his group also provided security “at several WDMCS schools during the protests and riots that occurred in the greater Des Moines area earlier this year. The purpose was to protect certain WDMCS schools that may otherwise be adversely affected by the rioters.”

The Conley Group also provided the security for the Des Moines Skywalk system from 2002 until the end of 2019, when the Skywalk Association terminated its contract with the company. Conley complained that the association’s security budget was inadequate and argued his guards needed to be armed.