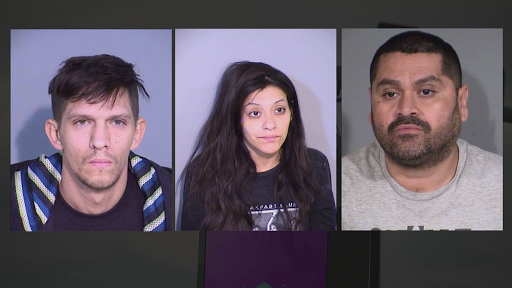 GOODYEAR, Ariz Feb 11 2021 Three people are facing a slew of charges after police say they impersonated officers, kidnapped and robbed two people who had just won some money at a Valley casino.

Court documents say it happened in January. Two people had won about $300 at the Desert Diamond Casino in Glendale and left around 2 a.m.

However, they didn’t realize a group of suspects had been watching them and followed them out.

Court documents say the suspects then handcuffed and zip-tied them and shoved them into one of the suspect’s car.

The suspects allegedly threatened the victims, forcing them to give up their ATM pin numbers. The suspects also stole their wallets and purses before letting them go hours later, documents said.

The victims then called 911 for help.

Detectives from the Goodyear Police Department took over.

Detectives combed through the casino’s security video and saw the suspects following the victims and communicating with each other over their cell phones throughout the night.

Surveillance video from the casino also showed a “light bar” in the front windshield of one of the vehicles used by the suspects.

Police then obtained a search warrant for cellular records tied to the suspects. Detectives obtained GPS location pings for the device which ultimately led them to one of the vehicles seen in the surveillance footage.

Police also obtained a search warrant for a residence belonging to one of the suspects, where they recovered U.S. and Yen currency they believe belonged to the victims.

They also recovered a brown Louis Vuitton purse that belonged to one of the victims inside a hotel room being used by one of the suspects.

They each face a laundry list of charges including kidnapping and armed robbery.

How to avoid a police impersonator

“I think Goodyear PD did a tremendous job on this,” said Andy Anderson, a police practice expert and retired Phoenix Police assistant chief.

Anderson says because blue and red lights are so widely available, impersonating a police officer is becoming easier to do.

There are two tips Anderson has for drivers to protect themselves from someone impersonating an officer.

But in the rare case an unmarked vehicle is involved in a stop, Anderson recommends the driver pull over in a populated, well-lit area.

“What I recommend is if you’re in the city that you go to a highly populated place. Pull into a convenience store where it’s well lit,” Anderson said.

Anderson also says drivers can always call 911 to confirm whether a vehicle is associated with a police officer before you have any interaction with him/her.

“Call 911 and tell them where you’re at they can very quickly validate that yes that’s a police officer behind you so you can safely pull over and not be concerned,” Anderson said.