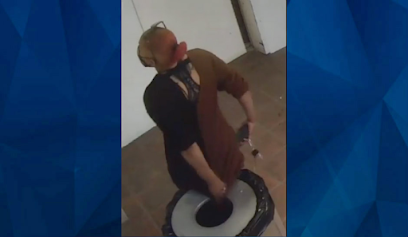 Brentwood CA Nov 20 2021 When Lisa Stanley, who manages a California apartment complex, checked her security cameras after a tenant found feces in the lobby, she was flabbergasted.

A DoorDash driver could be seen pulling up her dress and pooping on a lobby trash can after making a delivery to the Brentwood complex Friday, Nov. 12, Stanley told KNBC.

“This girl purposely got out of the elevator, saw the trash can there, didn’t even try to get on top of it in the hole,” Stanley told KABC. “I can’t ever unsee what I saw in that tape.”

The woman, who also left a trail of feces to the door, did not even try to clean up the mess, Stanley told KNBC.

The security footage stunned her.

“I checked that video and I literally threw up, I was so sick,” Stanley told KCBS.

“There is no scenario in the world for what I saw to happen.”

In a statement, DoorDash said the driver had been removed from its service, according to the station. The company said it will pay for cleaning the lobby and cooperate with any police investigation. ”

The trust and safety of our community is extremely important and what’s shown in this video is absolutely unacceptable and disturbing,” DoorDash said, KCBS reported.

Stanley told KABC she wants DoorDash to repay the $325 she spent to have a hazmat team clean up the lobby. “This is a health issue,” Stanley told KTTV. “You have a human being who’s taking a poop in the middle of her job in a lobby of an apartment building and then resuming her job, which is delivering and touching food.”

Brentwood is a suburban neighborhood in Los Angeles.

‹ 4 dead, including 2 former police officers on the run, following traffic stop › Man skipped out on $4K bill at Bellagio restaurant, made bomb threat