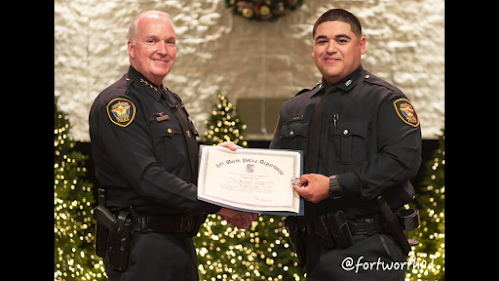 Fort Worth TX Dec 17 2020 Zach Briseno had always planned to serve his community as a police officer after his time in the military was done.

On Dec. 11, the double amputee was part of the Class 148 of graduating officers in Fort Worth.

The department released a video about Briseno’s story on their Facebook page.

Briseno, 35, who was born and raised in Fort Worth, enlisted in the Marine Corps right after high school.

He was from a family of military members, including his father, who was in the Army.

Briseno served two tours in Iraq. It was on the second, in November 2007, when he lost both of his legs in an IED explosion.

Briseno was returning home with his unit at the end of the day, traveling through the streets of Fallujah.

An IED hit his Humvee, right under his seat in the vehicle.

“I didn’t realize the severity of it, but right away I felt a tingling feeling, like if your foot falls asleep,” he said.

Briseno said he felt pain and a burning sensation in the lower half of his body.

His unit worked to apply tourniquets immediately, while worrying about a possible attack.

Briseno remembers telling the men he was with, “Tell my son I love him.”

He was told his legs were blown off in the explosion.

Briseno was treated in Fallujah, then Germany and finally Bethesda, Maryland.

“I was in a rollercoaster of emotions,” Briseno said.

He would look down, expecting to see his legs, and they were gone.

Ultimately, he still planned to return to his hometown and serve his community. Briseno was inspired as a teenager to follow his path.

He was an explorer with the Fort Worth Police Department and had a lot of great mentors.

“I want to serve my country and then I want to come back and serve my community,” he said.

Briseno worked incredibly hard to make his dream of being a Fort Worth police officer a reality.

“You can do anything you want to do, you just really have to put the work in for it,” he said. “It will cost you some blood, sweat and tears, but if you want it bad enough, you can do it.”