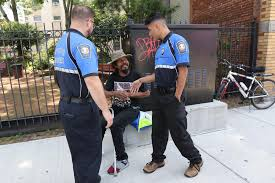 FRAMINGHAM MA July 31 2019 – Twenty-eight people are banned from entering Food Mart Liquors on Hollis Street, and another may have joined that list on July 17 after he attempted to steal two cases of beer from outside the business during delivery day.

“To keep my good business, I need to keep the bad business out,” said owner Abu Batel, a 13-year Framingham resident. When he sees customers drinking his products outside, he doesn’t allow them back in.

Adam Fini and Gabriel Araujo, of the so-called Downtown Engagement Team, soon arrived at the scene, and were asked by Batel to help guard his shipments from theft.

Later that afternoon, Fini and Arajuo saw the thief – “quite inebriated,” according to Fini.

The detail, which acts as liaisons who regularly talk with police, the South Middlesex Opportunity Council and the city, has been in place for only two weeks, but has “made a positive impact” downtown, Batel said.

“The general demeanor of everyone has been more calm since we started,” said Fini. “Some of the customers and business owners expressed that they do feel a little bit safer.”

“Keeping people calm is the big thing,” said Thraen, noting that tempers rise with the temperatures. She called the project “the two most rewarding weeks” of her 15-year career in public service, taking inspiration from cities like Boston, Cambridge and Worcester with similar programs.

During their first week, detail workers reported public drinking to police, gave tips to the police narcotics team, spoke with apartment property owners and learned about problems, including a “makeshift bathroom” in a property owner’s stairwell, said Thraen.

At first, some people hanging around outside stores questioned if detail workers were police officers, and others asked if they were part of the federal Immigration and Customs Enforcement, said Fini. But after talking with detail workers, some were willing to seek help and felt they could anonymously report life-threatening situations, such as an overdose that occurred at a park last week, he said.

Fini said detail workers met 10 to 20 people per day, and had contacted police about twice a day to report something.

Fini said Burkis Square is “blanketed” with cameras – at least 50 public and private cameras are installed along the streets. During the detail’s first day, they witnessed an arrest take place on one of these cameras, he said. According to police logs, the incident involved an inebriated homeless man disrupting traffic.

The age range is “very vast,” he said, ranging from early 20s to over 50, with different ethnic backgrounds. Many of them grew up in Framingham, and many live throughout the city, he said. Most have their own apartments or homes, said Fini, with some living a few towns away.

Why they hang out on the streets is unknown, said Fini and Araujo, but Thraen said it’s about social interaction.

“It’s very communal, and they’re all like family out there,” she said.

“A couple of them just need people to talk to – people who look at them like they’re humans,” said Araujo. ”(Some have said to) us, ‘I don’t want to be here, this isn’t the life I want.’”

“Since we sell the liquor, at first sight, someone might think that we’re the bad guys,” said Batel. “But it’s not like that.”

Many of the people on the streets have interacted with social workers and police before, but talking to neutral outsiders have made many, especially immigrants, feel more comfortable sharing concerns, said Thraen.

Araujo, born and raised in Brazil, is fluent in Portuguese, so many felt an “immediate connection with him,” said Fini.

“None of this probably would have worked as successfully if we didn’t have someone that didn’t speak Portuguese – no way,” he said. Many shop owners were concerned with reaching out to police and having their names involved.

“There are certain gang affiliations and stuff like that, so they’re concerned about repercussions,” Fini said.

“Most of the businesses have spent a lot of time trying to figure out what to do, and they don’t want to call the police for the same thing every time,” said Thraen.

That goes especially for problems that aren’t considered “high crime,” like loud arguments or public drinking. She said the goal is for businesses to “be productive,” and reduce the amount of time spent on the phone calling police.

One merchant said a few sales have been lost just from people outside deterring customers. Last Wednesday, a Portuguese-speaking customer told Araujo that when she pulled into a parking lot, someone came up to her car and began looking into her window.

One resident of Framingham, who asked to remain anonymous, said he’s seen shootings, stabbings, fights, “you name it,” on Hollis Street.

He’s lived in the city for 23 years, and recognizes some people on the streets from middle and high school. Behind some of the buildings on that street, he often sees needles, used condoms and empty vodka bottles. He said if a large enough shelter isn’t built to accommodate the number of people needing it, “the problem will persist.”

Some recommendations made by detail workers at the end of their two-week period included a need for public bathrooms, a community team to clean parking lots, and a full-time drop-in shelter.

Thraen said Burkis Square’s homeless population reached about 30 individuals in 2018 before dipping to 20-30 this year.

Police Lt. Harry Wareham said police and the city are committed to improving downtown and are working to engage more with the public to solve problems collaboratively, inspired by the hub model used by Chelsea police.

“Instead of using a 19th-century approach to arresting everyone, we’re trying to find solutions and are working to support the at-risk population in Framingham instead,” he said. “We don’t want to do the same old, same old. We want to try something new, and something that works – that’s our goal.”

Wareham said two officers are assigned to patrol Burkis Square daily, and that a downtown task force was recently launched.

“Everyone has to work together to create a solution,” he said.

Thraen said fundraising is underway to bring back the detail for two more weeks in August. To donate, visit Gofundme.com/f/burkis-square-better-project.