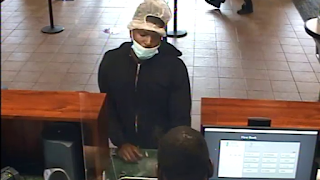 A security officer was shot and killed during an attempted armed bank robbery in East St. Louis on Friday, police say.

Investigators are looking for two gunmen considered to be armed and dangerous. Both are Black males, both about 5-foot-8 or 5-foot-9 inches tall.

One was wearing a black hoodie with “distinct white writing” down the front, according a release from the FBI. Horizontal writing on the left arm said “Dunder Mifflin” and vertical writing said “Paper Company.”

The other suspect was wearing a black hoodie with a silver zipper on the front, black pants, and black shoes.

The investigation has be turned over to the FBI, Perry said.

The FBI also is trying to locate a 2002-2011 white Lexus with temporary Missouri license plates, black wheel rims and no gas cap.