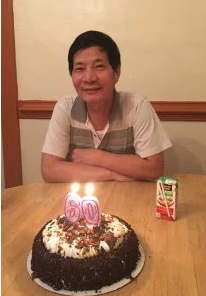 VIRGINIA BEACH, Va. Jan 31 2019 – The family of the 60-year-old Chesapeake man who was killed by an armed security guard while playing Pokémon Go in 2017 has filed a wrongful death lawsuit.
On January 25, Jiansheng Chen’s family – who are the administrators of his estate – filed the suit against Johnathan Cromwell, the security guard; Citywide Protection Services, Inc. and Riverwalk Community Association, Inc.
Chen’s family is filing for $5 million in compensatory damages and $350,000 for punitive damages for a total of $5,350,000.
The shooting happened on January 26, 2017, at 11 p.m.
In the lawsuit, Chen’s family claimed that the victim was not armed. The defense, throughout court proceedings, has maintained Cromwell was acting in self-defense, as they previously stated Cromwell thought Chen planned to use his vehicle to hit Cromwell.
Chen’s family claimed that Chen didn’t know English and that he wanted to leave the area, but instead he was shot by Cromwell.
The lawsuit claims that Cromwell used negligent and excessive force in an attempt to detain and then “unjustifiably used deadly force.” The family then goes on to say that Chen was wrongfully killed.
Chen’s family goes after the security company, saying the company hired someone that was “neither competent nor fit to perform the duties of an armed security guard.” The lawsuit continues to say that Cromwell is “dangerous, aggressive, erratic, careless and has a violent nature.”
In the lawsuit, Chen’s family concludes by saying that Citywide failed to use its proper judge of character when hiring Cromwell.
The lawsuit then goes after Riverwalk Community Assoc., saying because it maintained the area it should have kept the area safe. The family said Riverwalk should have known Cromwell was armed and should have been aware of his character.
Cromwell’s attorney, Andrew Sacks, provided the following statement:
The incident in question occurred over 2 years ago.
This suit was filed on the second to the last day of the applicable statute of limitations for doing so,and just a shade over 3 weeks before this major criminal trial.
The suit alleges against Mr. Cromwell a wrongful death, and further alleges that Mr. Cromwell used excessive force against Mr. Chen.
These accusations against Mr. Cromwell have been denied by him since day one. To the contrary, his position has been unwavering-that his actions that night were solely taken in self-defense of his life. Self-defense utterly undermines the whole premise of the suit and renders it without merit.

Chen is survived by his wife and two children.
wtkr