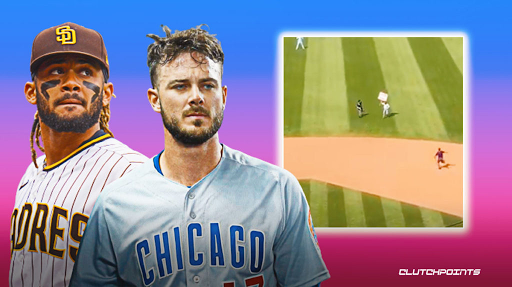 Chicago IL June 4 2021 The fan incidents keep occurring and another one took place on Wednesday afternoon in Chicago. A fan was caught running onto the field in the middle of the Chicago Cubs game against the San Diego Padres and was brought down by Wrigley Field security. The interesting part is the message the fan was trying to convey.

A for effort? The fan had a sign that read “Jesus is Lord,” although that is a bit of an unorthodox way to spread the message as he interrupted the Cubs lead.

The Cubs players on the field just stood in amazement and mere confusion about what was going on. This happens the same week that Brooklyn Nets guard Kyrie Irving had a water bottle thrown on him in Boston and a fan ran onto the court and was tackled by security during the game between the Washington Wizards and Philadelphia 76ers.

Ja Morant’s family dealt with inappropriate slurs at a Utah Jazz game and Russell Westbrook had popcorn dumped on him. Last but not least, Trae Young was spat on at Madison Square Garden. While those are all incidents that occurred in the NBA, it still raises the question of what these fans are thinking.

However, All this fan wanted to do was spread the message of the Lord, but he might be slapped with a hefty fine and perhaps some other charges after being brought down by the Wrigley Field security guards. in the midst of the Cubs home game against the Padres as Chicago looks to complete the series sweep on Wednesday afternoon.

Hats off to the fan for a valiant effort in the middle of a Cubs game before being decked by security, although that isn’t the most effective way to get the message across. It will be interesting to see the punishment this fan receives for such actions.