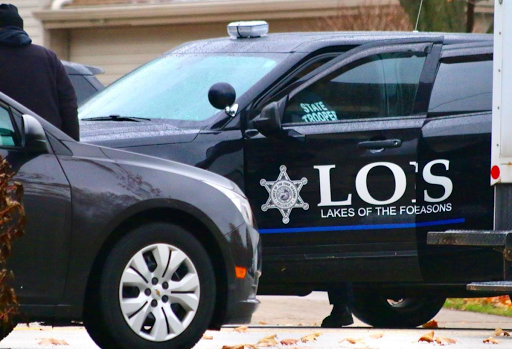 CROWN POINT IN December 11 2020— Nearly two years after a criminal probe opened into a Region gated community’s security team, felony charges have been filed against two of the guards and the homeowner’s association itself.

Two years ago, state police investigators raided the security building at the main entrance of the gated community, located near Winfield.

At the time, sources with knowledge of the probe said it was, in part, an investigation into impersonation of public servants and other potential criminal offenses related to traffic stops made by Four Seasons security guards.

A source with knowledge of the investigation confirmed the warrants were being served on Lakes of the Four Seasons security as part of a probe into reports of drunken driving and other traffic offenses that weren’t reported to state or local authorities.

In some cases, motorists driving on the private roadways of the gated subdivision were reportedly pulled over, detained and even assessed fines ranging into the hundreds of dollars, payable to the homeowners’ association, the source said.

In a number of cases, security guards allowed allegedly drunken drivers to find other means of transportation home after being pulled over, the source said.

The Lake County Sheriff’s Department handles all calls for service, including misdemeanor traffic offenses such as reckless driving, driving while suspended or operating while intoxicated, Sheriff Oscar Martinez said.

“We cannot enforce violations like disregarding stop signs or parking violations, because there is no agreement (for the department to provide security within Lakes of the Four Seasons),” he said.

The recent charges follow another incident in which security guards for the facility are again accused of playing cop.

More than two years ago, the state revoked the Lakes of the Fours Seasons security force’s emergency vehicle authorization. But earlier this year, two of its security workers pulled over a 15-year-old driver while using marked vehicles and wearing uniforms, then chased the boy when he fled, court records allege.

Indiana State Police learned of the pursuit July 26, after the Lakes of the Four Seasons public safety department requested that troopers respond and take a report because the boy damaged a gate as he sped away from the security workers, according to court documents.

Lakes of the Four Seasons provided state police with reports and footage from a body camera worn by Almada, one of the two guards charged in the recent case.

That footage showed Almada and co-defendant Wood pursued the teenager as the teen fled after Wood stopped the teen for speeding, Lake Criminal Court records state.

The Lakes of the Four Seasons Property Owners Association is not licensed by the Indiana Private Investigator and Security Guard Licensing Board.

Wood wrote in his report he used a radar to clock the boy going 35 mph in a 25-mph zone, activated his emergency lights and stopped the boy near East 117th Avenue and Kingsway.

The body camera footage showed the boy told Almada where he lived, but Almada told the teen “he could call county police” to ask for the information, court records state.

Almada told the boy to “sit tight” and began to talk with Wood about the boy’s age.

“If Winfield would have caught him, oh, my God, hooked,” Almada said, likely referring to towing the car, records state.

Almada asked where Wood’s spotlight is pointed and commented, “Looking back while digging for something is not a good sign,” and the boy drove away, according to documents.

Almada tells Wood, “Don’t pursue, don’t pursue,” but Wood drives after the boy and Almada runs back to his vehicle, records allege.

Lake County sheriff’s police, who routinely patrol the gated community as part of a district, were not notified of the alleged traffic stop or chase until the fleeing vehicle crashed through the gate, records state.

The boy and his mother later told state police they received $1,200 in tickets from the association for “violations” related to the July 26 incident.

The attorney general’s office issued a subpoena to Lakes of the Four Seasons for all traffic stop records from 2017 to 2018, then turned the documents over to Indiana State Police.

According to the manual, the association provides all equipment except firearms to security workers, including vehicles, patches, badge and uniforms. The manual also required security workers to use “red lights and/or sirens” when using their vehicles as “emergency vehicles.”

The LOFS association was once authorized by the Indiana Department of Transportation to operate its vehicles with an “emergency vehicle designation.” However, state police determined the association was using blue lights on its vehicles in violation of a state law that prohibits such use on all vehicles except those operated by genuine police.

“The association was informed that they would only be permitted to use amber and white lighting and were not allowed to pursue vehicles or complete traffic stops,” court records state.