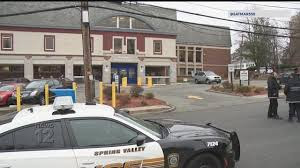 Spring Valley NY Feb 19 2020 A female security officer was fatally stabbed on the third floor of the Finkelstein Memorial Library Tuesday afternoon in a chaotic scene that ended when patrons gang-tackled the suspect until police could take him into custody.

Spring Valley police and medics responded to 911 calls shortly after 2 p.m. and rendered aid to the 52-year-old woman.
She was rushed to Good Samaritan Hospital, where she was pronounced dead.

Her identity wasn’t released pending notification of her family.

The name of the suspect, a 25-year-old Spring Valley man, also had not been released.

Luis Velasquez said that he was working on his computer upstairs at the popular library when he heard screaming. He didn’t pay attention at first until the screaming grew louder.

“I looked up to see what was going on and I saw the person on top of someone else, stabbing them,” he said in Spanish. “The person that stabbed the other person ran … And then someone else threw a chair at him.”

Velasquez said he suddenly saw the knife as the attacker tried to flee.

“He ran towards the exit, but a group of people subdued him at the door,” he said. “It was really one person who first grabbed him, but then other people restrained him, too. Everything happened really fast.”

Velasquez added: “This incident is awful because I felt very safe here,” he said in Spanish. “I never thought something like this could happen.

The library closed for the rest of the day following the stabbing due to what a phone message called an “unforeseen emergency.”

Finkelstein Library is one of Rockland County’s largest and busiest public libraries, serving more than 100,000 residents in the East Ramapo school district.

The library said on its Facebook page that it will be closed on Wednesday.