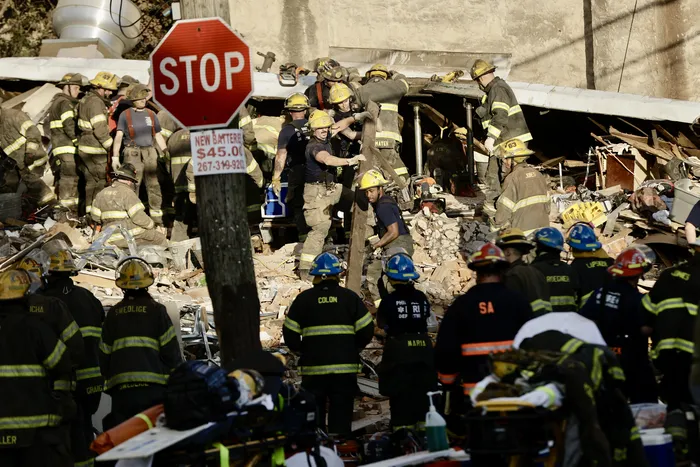 Philadelphia PA June 18 2022 A Philadelphia firefighter was killed and five others injured in an early-morning building collapse that has devastated the Fire Department and left a neighborhood shaken.

A city building inspector was also injured in the collapse in the city’s Fairhill section, which followed a fire at a popular pizza shop.

The firefighter who was killed was not immediately identified, pending notification of family, but was described as a 27-year veteran.

“It’s going to be a rough several weeks,” an emotional First Deputy Fire Commissioner Craig Murphy said at a media briefing just before 8 a.m. near the collapse site on the 300 block of West Indiana Avenue in North Philadelphia.

Six first responders — five firefighters and an inspector from the city’s Department of Licenses and Inspections — had initially been trapped in the collapse at 3:24 a.m. It followed what Murphy said was a “pretty routine” box fire shortly before 2 a.m., and that the collapse occurred well after firefighters had the blaze under control.

The five who escaped made it from the collapse at different times. One jumped from the second story of the building, Murphy said. All were rushed to a hospital and are now in stable condition.

The fire marshal is launching an extensive investigation, Murphy said, but no foul play is suspected at this time.

“You can’t predict this,” Murphy said. “This was just a catastrophic accident that has really hurt our department.”

Half a block from the collapse, Wanda Rivera was awake watching TV around 1:30 a.m. when she heard sirens and trucks rushing toward the pizza parlor.

“At first it was just a lot of smoke so we thought there was a fire,” Rivera said. “They put out the fire then we saw the firemen leaving. Then they came rushing back again.”

First responders blanketed the blocks around Third and Indiana shortly after 7 a.m., where dozens of firefighters, police and paramedics stood in a near-motionless crowd surveying the scene. The smell of burnt wood still lingered in the morning air.

At 7:19, the mass of firefighters slowly dispersed from the rubble, downcast and wiping tears from their eyes as they exchanged hugs. Many were speechless; few words were said as the rescue effort appeared to have come to a tragic conclusion.

Patricia Sermarini rushed to the scene when she saw the alert on the Citizens app about the collapse and the trapped first responders.

She said her son-in-law, a firefighter, was on the morning shift. As she pushed her way toward the edge of the taped-off scene on American Street, she said all she could think was, “I just need to see him.”

Relief swept through her when she saw her son-in-law approaching from the site of the collapse. She said he had been one of the firefighters on scene helping with the rescue effort — but he had not been injured in the building collapse. He was filthy with soot and dust, she said, and she hugged him immediately.

Moments later, Sermarini said she saw firefighters pull a body from the rubble.

”It’s so terrible,” she said. “This is so hard for them. They just want to get home to their families.”

The building reportedly had a pizza parlor on the first floor and apartments above. Property records indicate the property had been sold in December 2021 for $120,000, shortly before Star Pizza opened its doors.

City records indicate the building had failed an inspection in May 2019. At the time, investigators cited issues with the kitchen hood, fire extinguishers, smoke alarms, and open junction boxes. Those violations were listed as outstanding in city records again in June 2021, though it remains unclear whether investigators have visited the property since it changed hands seven months ago.

Neighbors said Lucky Garden Chinese restaurant had operated at the building for about 12 years prior to Star Pizza.

Xavier “Sabi” Rivera said his parents owned the building for years until selling it in 1996 to 1997. It had been a restaurant, he said, with pool tables and an arcade.

Families of Chicago cops, firefighters who die by suicide will get benefits