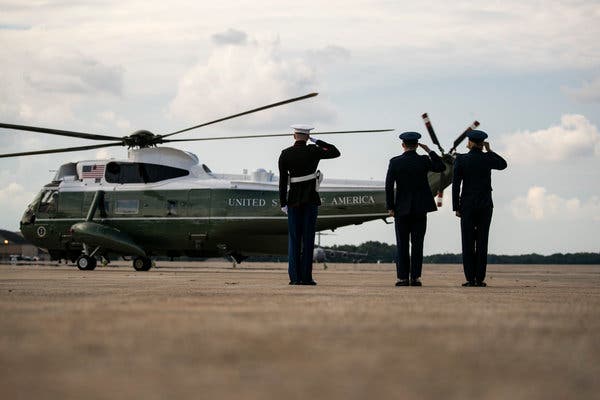 The former Marine, Brandon M. Magnan, 37, of Naples, Fla., was charged on Jan. 6 with false personation of officer or employee of the United States, according to a criminal complaint by the United States Secret Service.

It wasn’t clear why Mr. Magnan was trying to get near the helicopter. Marine One, which is piloted and protected by the Marine Corps unit known as HMX-1, is used to transport the president for shorter trips, the Secret Service said.

Mr. Trump was spending his winter vacation in Palm Beach, Fla., at his private Mar-a-Lago resort at the time of the episode with Mr. Magnan.

On Jan. 5, a protective zone was established around Atlantic Aviation, which provides hangar space, jet fuel sales and flight support services, as Mr. Trump was preparing to leave West Palm Beach for Washington, the authorities said.

Mr. Magnan was driving a Honda Pilot with an unidentified male passenger at about 3 p.m. when they approached a security checkpoint. Mr. Magnan identified himself as a member of HMX-1 and presented a credential that indicated he was a law enforcement officer with the United States Marine Corps, according to the complaint.

Investigators said the credential bore the seals of the Marines and the Marine Corps Executive Flight Detachment. Mr. Magnan was permitted through the checkpoint.

He presented the same credential at a second checkpoint, where he was allowed to proceed, the complaint said.

But a sheriff’s deputy there noticed that Mr. Magnan was not wearing a Marine Corps uniform, which is standard during presidential travel, the complaint said.

The deputy contacted members of the security detail, who identified the credential as fake. When confronted, Mr. Magnan told law enforcement officers that he was a retired member of HMX-1, the complaint said.

The Secret Service found that Mr. Magnan had served with the Marines until he was dishonorably discharged about 10 years ago after being convicted at a court-martial for “serious offenses.”

Mr. Magnan is listed in the Florida Department of Law Enforcement Sex Offender registry for convictions in 2010 in military court related to abusive sexual conduct and sodomy.

In one case, a lance corporal testified that he fell asleep in a hotel room with Mr. Magnan after the Marine Corps ball and awoke to find Mr. Magnan’s hand in his pants and over his boxer shorts, according to military court records.

Mr. Magnan was released on a $100,000 bond, according to court records. Neither Mr. Magnan nor his lawyer, Peter Vincent Birch, could be reached on Saturday.

If convicted, Mr. Magnan faces a maximum of three years in prison, a fine of $250,000 and a year of supervised release. He has a court hearing scheduled for Jan. 27.

It was not clear who the unidentified man traveling with Mr. Magnan was or whether he was arrested. It was also unclear how close Mr. Magnan got to Marine One or how many more security checkpoints he faced.