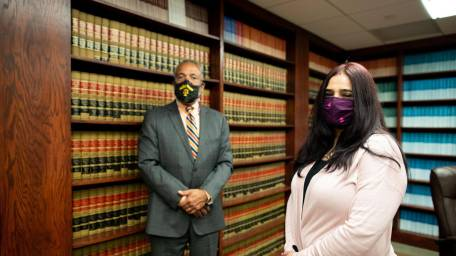 The pregnant Nassau University Medical Center security guard was forced to work outside in 95-degree heat without water and forbidden from seeking immediate medical attention when she began bleeding, part of a pattern of retaliation and discrimination, according to a federal civil rights lawsuit.

The suit, filed this week by Forbes in the Eastern District of New York, names NUMC, its parent company, Nassau Health Care Corp., and two current or former security managers, and seeks $50 million, plus damages, costs and fees.

Forbes, 46, who was born in India, was fired by NUMC while on maternity leave in 2012 after her security license lapsed. She was rehired after filing a complaint with the State Division of Human Rights before being terminated again in 2019 for taking too many sick days, the lawsuit alleged.

Married and a mother of two, Forbes, of Hicksville, said in an interview that the terminations were part of a deliberate effort to intimidate her by two of those named in the lawsuit, Public Safety Capt. Bruce LaPlante and John Acquavella, a department supervisor.

Megan Ryan, NUMC general counselor, declined to comment. LaPlante, who no longer works at NUMC, did not return calls for comment while attempts to reach Acquavella were unsuccessful.

Forbes was denied full-time status as a public safety officer for eight years until she filed another Human Rights complaint in 2018, she said, adding that less senior white guards were quickly promoted.