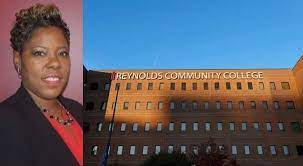 RICHMOND VA July 21 2022 — In what federal authorities described as a “monumental betrayal of the public trust,” the former financial aid director at Reynolds Community College was sentenced Tuesday to more than five years in prison for orchestrating a scheme that resulted in the theft of at least $230,850 in federal and state student loan and grant funds.

Kiesha Lashawn Pope, 48, “used her sensitive government position to enrich herself to the detriment of the public trust and the students she was meant to serve,” Assistant U.S. Attorney Avi Panth said in arguing the gravity of Pope’s corruption requires a stiff punishment.

Following testimony from Reynolds President Paula P. Pando on how Pope’s deception damaged the public’s confidence in the school, U.S. District Court Judge David J. Novak sentenced Pope to 63 months on her earlier guilty plea to wire fraud. The punishment is at the top of discretionary federal sentencing guidelines, which called for an active prison term of between 51 and 63 months.

“This crime is so truly despicable,” Novak said in remarks from the bench. “And the fact that she enlisted family members in the [fraud] makes it even worse. This scheme took seven years. This was not an aberration. It was seven years of lying, cheating and stealing,” and taking money from deserving students trying to better themselves.

“Our integrity has been questioned by donors, board members, community members and students,” Pando told the court. “It was embarrassing.”

“While we can quantify the number of questions we have had to field since the news broke, what we cannot truly quantify are opportunities where we were passed over for investment due [to the publicity],” she added. “Foundation board members wanted to be assured that controls were in place to protect the dollars they raised and donated from being misused.”

To comply fully with the federal investigation, student financial aid officers hired in 2018, after Pope left, along with other members of the college staff spent more than 1,000 hours over four years gathering information, testifying and submitting documents to investigators. “This time was diverted from providing some of our most in-need students the guidance and support they needed to make appropriate financial decisions about attending college,” she said.

From at least 2010 until her fraud scheme was uncovered in 2017, Pope used her intricate knowledge and control over financial aid processes to divert federal and Virginia-funded financial aid benefits to her family members and associates who were not eligible to receive such funds. In turn, she received kickbacks from the four co-conspirators — her son, goddaughter, cousin and ex-fiancé — and ultimately received the majority of the proceeds.

Pope used the money for car repairs, retail shopping, a vacation on Disney Cruise Line and expenses for her imprisoned fiancé’s minor-aged children.

Panth said students from across Virginia — especially low-income students — relied on Pope to be a good steward of taxpayer dollars and of the limited educational resources, and to allocate those funds with integrity and based on genuine financial need. Instead of respecting the weight of those responsibilities, Pope used her position to skim money from these financial aid systems.

Moreover, as a direct result of Pope’s scheme to defraud, the Reynolds financial aid office did not deliver some funds Pope stole to students who were actually in need of such benefits. “Pope’s fraud dollars could also have funded roughly 22 full tuition scholarships for associate’s degrees for truly deserving students,” Panth said.

Pope, who was hired by Reynolds in 2006, suddenly resigned her position on Oct. 5, 2017, about two days after she was confronted by supervisor about the student aid fraud involving her goddaughter.

Eight months later, on June 28, 2018, she was hired by Virginia Union University as the school’s director of undergraduate and graduate school financial aid services and scholarship programs. Her employment there ended with her February indictment.

The four co-conspirators collectively received $264,450 in federal financial aid and $133,152 in state financial aid from about 2011 through 2018, according to the indictment. Because some of the conspirators attended Reynolds and initially received aid that may have been legitimate before they were deemed ineligible, the precise total of fraudulent funds dispersed is unclear. A conservative estimate was set at $230,850, which Pope will be required to repay.

Authorities have not yet decided whether to charge the co-conspirators.