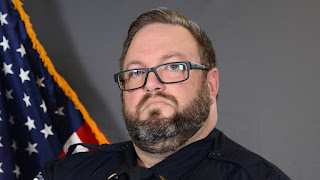 Lt. Joel Ruff, a 23-year veteran of the department, suffered the emergency during his shift, according to police spokesman Tim Lupo.

“We are heartbroken to share that a member of our Roswell police family, Lieutenant Joel Ruff, unexpectedly passed away,” Lupo wrote in a message that was shared on social media.

Ruff, 43, began his law enforcement career with the Police Explorers youth program in 1995 and was sworn in as a Roswell cop in 1998. He was a watch commander for the department’s night shift patrol when he died Thursday.

“Before he ever pinned on his first badge, Lt. Ruff knew in his heart that service to our Roswell community was his calling,” Lupo said in the statement. “He served our community in various roles with utmost dedication for 23 years.”

Police did not say what type of medical episode Ruff suffered or what he was doing when it happened. Messages mourning his death flowed in on the department’s Facebook page, where the news was announced.

“The joy and pride he found in leading his men and women was infectious, and there was nothing he would not do or give of himself to see them succeed,” Ruff’s farewell statement said. “His presence is irreplaceable, and his memory unforgettable.

“Lieutenant, rest easy. We have the watch from here.”