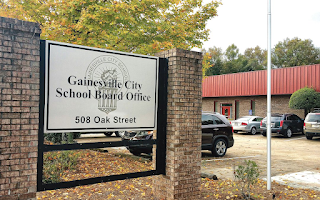 The Gainesville City school board announced at Monday’s meeting that it will be beefing up security in the wake of the school shooting in Uvalde, Texas, in May that killed two teachers and 19 children.

Superintendent Jeremy Williams said they are adding an “additional layer of security,” which will cost the school system about $1 million.

A security guard will be hired at every school, and they will have backgrounds in law enforcement, either active or retired.

The school system will also hire a safety and security manager, who will centralize security operations, which have up until now been split between Deputy Superintendent Priscilla Collins and Chief Operations Officer Adrian Niles.

Williams said they will likely make all hires by Sept. 1, once the board reviews a new policy in August that would allow them to arm certain staff.

Williams said, however, that only the security guards, in addition to the school resource officers, will be allowed to carry arms under the policy.
Gainesville Times