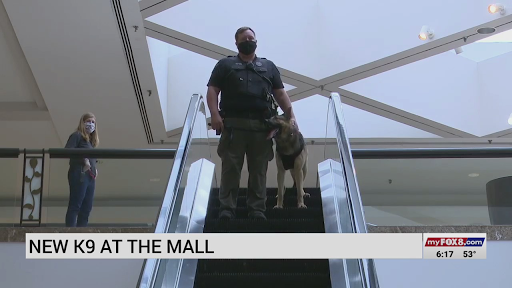 GREENSBORO, N.C. April 25 2021— The next time you go to Four Seasons Town Centre you might come across a four-legged friend with a nose to sniff out trouble.

“When you go shopping you don’t expect to see a K-9 unit at the mall,” said Adam Seward, a security officer and K-9 handler.

Rocco is the first weapons detecting dog in the Greensboro mall’s history. His mission is to make sure firearms or explosives don’t wind up on the property.

“There’s pretty much any situation that he can be thrown into and he’ll be good to go,” Seward said.

Rocco was trained in Europe and at Shallow Creek Kennels in Pennsylvania to smell specific odors. Seward trained Rocco for seven weeks before beginning patrols at the mall.

“Roco has been very efficient in his time here and he just loves coming to work every day with me,” he said.

While dangerous situations are rare, Rocco will be there to provide an extra layer of security.

“I just love something about watching a dog work,” Seward said. “Getting to take your best friend to work every day is something I enjoy deeply.”

Mall officials told FOX8 Rocco has not found anything serious since starting patrols several months ago.